My dogs are usually in and out of their doggy door throughout the day, but one day last September the dogs suddenly refused to use it. My dog Bounder was instead whining and pawing at everyone, trying to get them to follow him to go see something, and my dog Sammy kept sticking his head out of the doggy door flap, looking at something and then pulling his head back inside.

It turns out what the dogs had seen and wisely avoided were two mating Western Diamondback Rattlesnakes (Crotalus atrox) writhing around just outside of the doggy door. 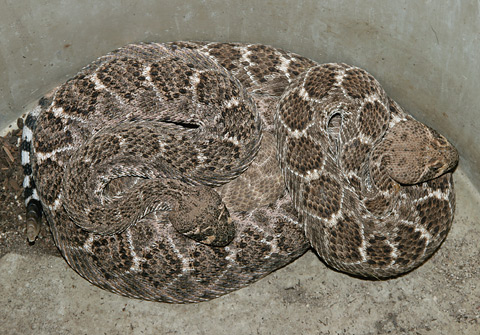 My yard is fenced with fine-mesh metal screen at the gates and chain link portions of the fence to keep the snakes out, but either my dogs or the squirrels had torn a snake-sized hole in the screen and these two large and obviously sexually mature rattlesnakes had found their way in.

Always eager to use his new snake grabber pole, my dad captured the two amorous rattlesnakes, who were quite enraged at being interrupted in so intimate a moment, and tossed them into a large bucket. My dad then took the now sullen snakes out of my yard and let them go in the desert where they belonged.

Western Diamondback Rattlesnakes are quite venomous and are one of the more irritable and aggressive species of rattlesnake. They are very common here in Tucson, and I have had dozens of them removed from my yard, mostly by the fire department, since I've lived here.

I would not be terribly surprised to be bitten by a rattlesnake someday because I have already had numerous close encounters with them. Thankfully, they usually rattle their tails to warn you of their presence before striking, so I've always been able to quickly get out of their strike range before being bitten.