The brightest bioluminescent insect in the World is not a firefly, but actually a species of click beetle, the Fire Beetle or Cucujo (Pyrophorus noctilucus). This large beetle has a brightness of 45 millilamberts. 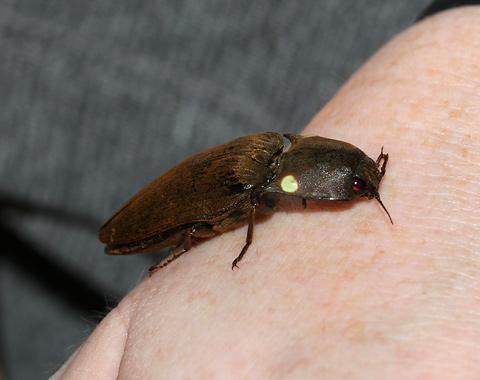 Fire Beetles are found in tropical areas of the Americas, including the Caribbean. This Fire Beetle was in the grass in front of our lodge in Costa Rica one evening. Even without its brilliant bioluminescence, I would have been impressed, as this 1.75 inch (4.4 cm) long beetle was by far the largest click beetle I've ever seen.

Click beetles (Family Elateridae) are so named because they are able to flex and snap their body segments, propelling themselves into the air and producing an audible click in order to escape predation or right themselves if trapped on their backs. 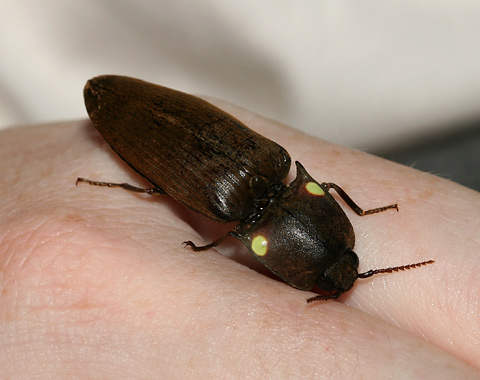 Unlike fireflies, Fire Beetles do not flash or turn their bioluminescence on and off, but they can vary its brightness. A Fire Beetle possess two glowing green spots on its pronotum and a third glowing spot on its abdomen that only becomes visible when the beetle flies.