Rattlesnakes are quite common in Tucson, and I have seen dozens of them here. Although most of the rattlesnakes I see here are Western Diamondbacks (Crotalus atrox), quite a few other species of rattlesnake can be found here as well, such as this Blacktail Rattlesnake (Crotalus molossus) I spotted in Sabino Canyon in September of 2004. 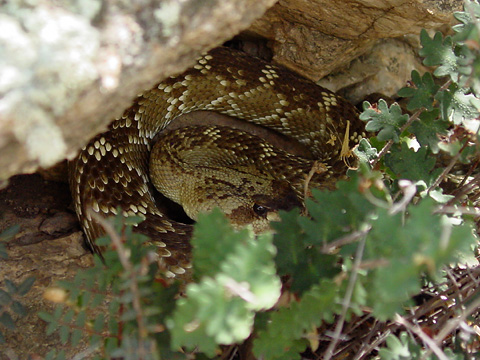 Actually, this rattlesnake spotted me well before I spotted it. That September, I was looking for ferns to photograph in Sabino Canyon. Desert ferns will leaf out again after our summer rains, and they are usually still around by September. I was inspecting the ferns seen in the foreground, and I had just reached out and touched the fronds when I heard a rattle and saw this venomous Blacktail Rattlesnake just inches from my hand.

I quickly jerked my hand back out of strike range, and the Blacktail Rattlesnake ceased rattling. I am now more careful when I reach out to inspect plants, especially near overhanging rocks which are favorite resting places for rattlesnakes!

Blacktail Rattlesnakes have a dark brown to black nose and tail tip. They also have dark, diamond-shaped patches on their backs, and each dark diamond has two, lighter blotches inside it.