Fireflies or Lightning Bugs are soft-bodied beetles in the Lampyridae Family best known for their glowing and flashing bioluminescence (emission of cold light by a living organism as a result of a chemical reaction). Here in the Americas, the adult males are the ones seen flying about and flashing as they watch for the answering flash or glow of a sedentary female waiting on the ground below. Along with the bioluminescent larvae of a few other beetle and fly species, the glowing, bioluminescent larvae of fireflies are known as Glow Worms. The females of some firefly species look very similar to the larvae and are known as larviform females. 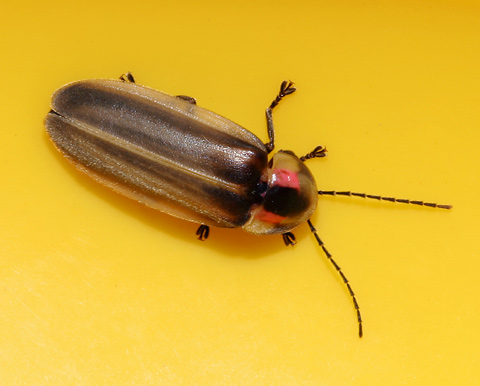 There are thousands of species of firefly, and they are found throughout much of the World in both tropical and temperate areas. I captured this particular male firefly (or luciérnaga as it is called in Spanish) above early one foggy evening in Alajuela, Costa Rica. The glowing male firefly flew right in front of me, and I reached out and captured him unharmed in my hand. I carefully took the captured firefly back to my hotel room and put him in a plastic container so that I could photograph him.

Like other beetles, fireflies have two pairs of wings. The hindwings are used for flight, while the forewings or elytra are hardened and function as protective wing covers. This male firefly was extremely anxious to escape captivity and resume his search for a female, and he kept flying around in the plastic container looking for a way out. 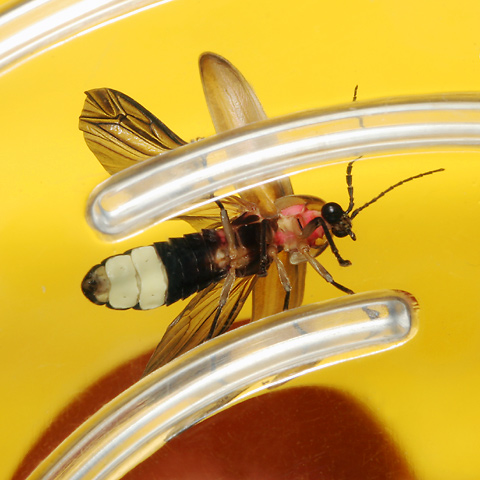 Fireflies are elongated in shape and their wing covers are often striped in varying shades of black and brown. Although they have large eyes for good nocturnal vision, their eyes are usually only visible from the side or from below because their head is concealed beneath their red, pink, or orange-marked pronotum. 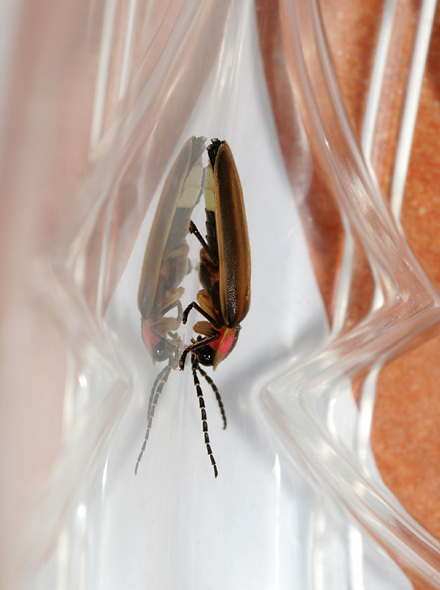 Occasionally, a firefly will stretch out its head and peek out from under its pronotum, probably to glimpse what lies above it. 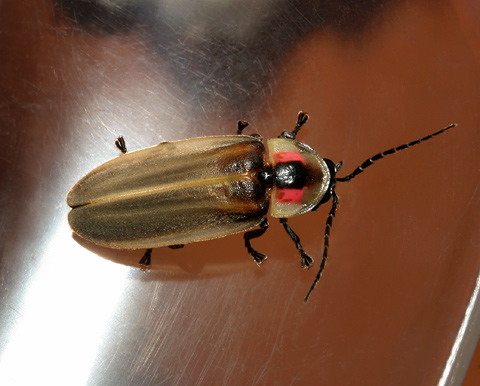 The last two or three abdominal segments on a male firefly are a pale yellowish to whitish color, and it is here where the luciferase-catalyzed reaction occurs between luciferin and oxygen to produce light. Although the most typical color for firefly light is a luminous yellow-green, the various species of fireflies can also produce green, yellow, orange, and red light. This particular male firefly's aerial light display was a double flash of brilliant orange light. Unfortunately, he refused to flash for the camera while he was trapped in the container, so I don't have any pictures of his orange bioluminescence. 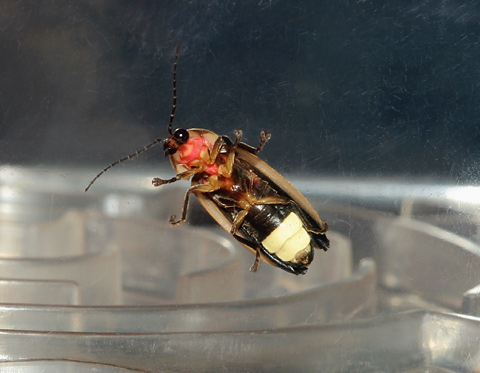 After I had taken a number of photos of him, I ventured back out into the foggy night and let him go in a grassy garden area away from artificial lighting. Happy to regain his freedom, he quickly climbed up a blade of grass and took flight when he reached the tip. 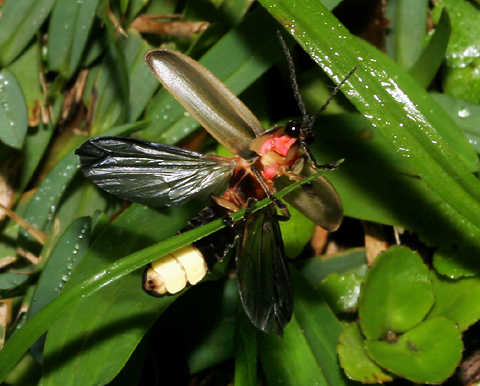 He began flashing as he flew past my head and soon disappeared into the foggy darkness on his renewed quest to find a female firefly.