As would be expected given their common name, I discovered this Pineywoods Geranium or Wild Geranium (Geranium caespitosum) growing in the piney woods, specifically the Ponderosa Pine (Pinus ponderosa) woods in Arizona's Santa Catalina Mountains in October of 2005. 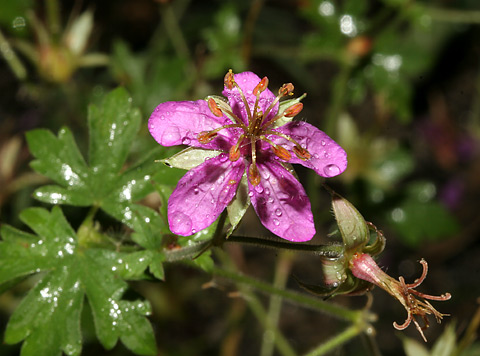 As you can see in the above photo, it began raining that day, which was a complete surprise and something that I was quite unprepared for. For the first time in my life, I was actually grateful to a litterbug when I found an empty plastic grocery bag to wrap my camera in. With the camera protected between shots, I kept photographing despite the intermittent rain and captured this magenta-colored Pineywoods Geranium flower as well as other autumn wildflowers.

Pineywoods Geraniums have several subspecies, and their flowers are rather variable, with 5 round-tipped to notched petals that range in color from white (unusual) to pale pink to lavender to magenta, and the petals may be faintly to boldly streaked in darker colors. The leaves are dark green and have 5 lobes.

Their genus name, Geranium, is from the Greek "geranos", which means crane and refers to their seed pods which resemble a crane's bill. This plant and others in the genus Geranium are true geraniums, unlike the garden geranium which is actually in the genus Pelargonium, although both are actually members of the Geranium Family (Geraniaceae).

These native perennials are fairly common in mountain canyons here in Arizona, and they bloom anytime from May to October.