Coastal mangrove swamps are great places to observe birds and wildlife, but since mangroves grow in or near intertidal areas, the best way to explore them is by boat. In May of 2007, my father, my cousin, and I took a nighttime boat tour of the Isla Damas mangrove swamp along the coast near Quepos, Costa Rica. The mangrove swamp was dark and a bit spooky at night, a confusing maze of often narrow channels between the dense, skeletal tangles of elevated mangrove roots. It was near low tide, so the muddy banks beneath the mangroves were exposed, and hanging over everything was the smell of brackish water and black mud. Echoing through the dark mangrove forest were the eery, gunshot-like sounds of the mangrove clams snapping their shells closed in response to the change in tide.

Although nighttime nature photography in a moving boat is challenging, we did managing to photograph a few of the interesting creatures we observed, including this immature White Ibis (Eudocimus albus) perched on a branch overhanging the water. 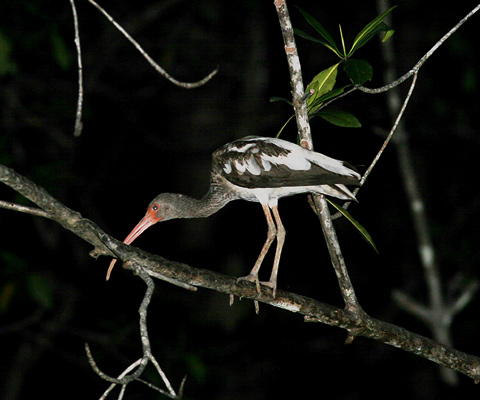 The adults are solid white with a long, red, decurved bill, while the immatures like this one are grayish brown with white patches and a paler, less colorful bill. Besides the White Ibis, we also observed several heron species (mostly night-herons), but they were either too close for our telephoto lens or they went skulking off into the trees before we could get a good photo of them.

Birds were not the only creatures in the trees, mangrove crabs will also venture up into the trees, and we spotted this reddish one hiding in some loose bark. 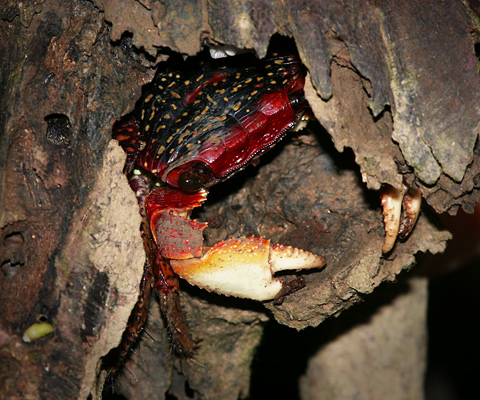 My unlucky cousin got an extra close-up view of one of these arboreal crabs when a small one fell out of the mangroves and landed on her chest (shrieking then ensued). Not only are crabs commonly found in trees and along the shoreline, they are pretty much found everywhere along the coast, and I even found a tiny, roach-like one scuttling around in our hotel room.

Snakes are another creature commonly found in trees here, and our guide spotted this Boa Constrictor (Boa constrictor) on a tree branch above our boat. 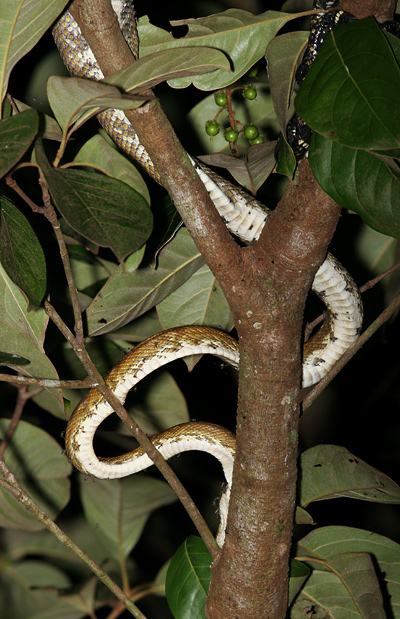 The Boa Constrictor was resting as it digested a fair-sized bird or animal meal (see the large bulge in its midsection at the top of the photo). Surprisingly, the lounging snake didn't seen to mind that it was covered with biting mosquitoes. 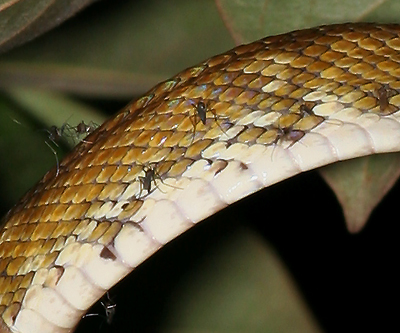 Despite their armor of scales, snakes can still be bitten by mosquitoes in those tiny areas of unprotected skin between the scales. Unlike this poor snake, the voracious mosquitoes luckily let me alone, perhaps because we were in a moving boat.

We not only spotted animals in the trees, but on the muddy banks as well. Through a tangle of mangrove roots, we observed a fast-moving band of Crab-eating Raccoons (Procyon cancrivorus) foraging on the ground for crabs, frogs, and other creatures.

A safe distance away from the band of hungry raccoons, our flashlights revealed the ghostly white belly and gleaming eyes of a monstrous Smoky Jungle Frog (Leptodactylus pentadactylus) sitting quietly on the bank among the mangrove roots. 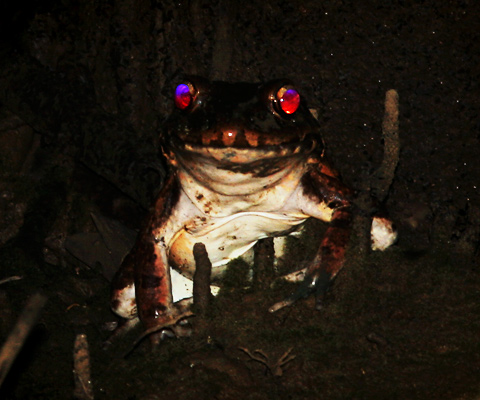 I have seen several of these large, predatory frogs before, but this Smoky Jungle Frog was by far the largest one that I've ever seen. The huge frog just sat there like a statue while we slowly drifted past in the boat. The frog's glowing, jewel-like eyes were flickering red and blue in the wavering beams of our lights, giving it a weirdly magical appearance. Because of its large size, motionless, enigmatic gaze, and mesmerizing eyes, we jokingly dubbed it the "Hypnotoad" after the mind-controlling toad on Futurama.

The Smoky Jungle Frog's weird glowing eyes were not the only ones reflecting back at us from the darkness. We also saw the glowing eyes of several American Crocodiles (Crocodylus acutus) on the surface of the dark water. Because the eyes of crocodiles strongly reflect light, even from a distance, using lights to scan the water for their eye-shine is the best way to spot them at night. Despite their frightening reputation and large size, American Crocodiles are fearful and wary of humans in boats, and we only got a brief glimpse of their eyes and nostrils before they would sink beneath the surface of the water and swim away with barely a ripple to give away their location. 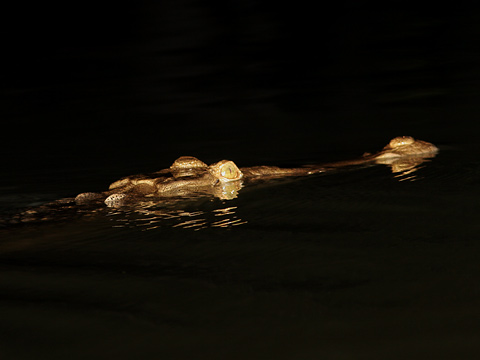 Baby American Crocodiles are much less wary than the adults, and we were able to approach this little one below quite closely with our boat. 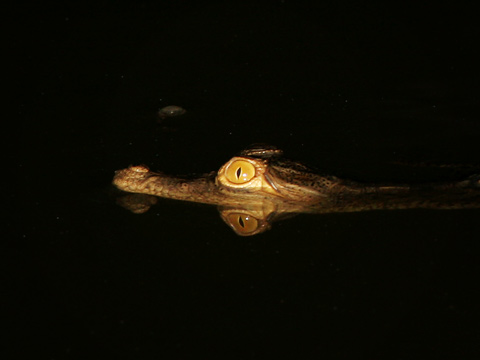 Eventually, the baby crocodile decided that we might actually be dangerous, and it swam off to hide in the mangrove roots.

Although most of the adult American Crocodiles were secretive and surprisingly devious in avoiding us, we did happen across one rather foolish and unwary one. The crocodile was resting in the water near a tree and it didn't notice us as we approached. When it finally did notice us, the crocodile panicked and with a thrash of its great tail, it lunged forward and collided hard, snout-first into the tree. 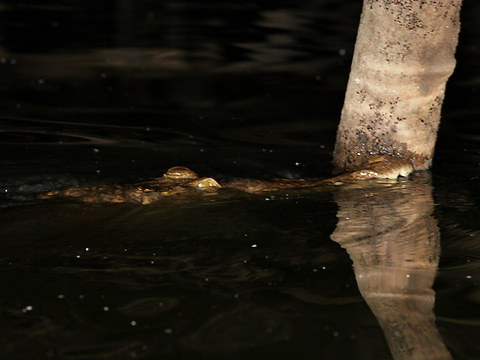 The crocodile looked stunned for a moment (and to our subjective eyes, quite embarrassed) before collecting its wits and sinking gracefully below the surface and swimming away.

During part of the tour that night, we passed a field full of cattle at the edge of the mangroves. The guide told us that the farmer loses several calves a year to the crocodiles (or cocodrilos as they are commonly called in Spanish). Although we didn't see any, Spectacled Caimans (Caiman crocodilus) are also found here in the mangrove swamps, but they are smaller than American Crocodiles and so not as potentially dangerous.

I don't know if crocodiles can capture bats or not, but that night we saw quite a few Proboscis Bats (Rhynchonycteris naso) and other, larger bats swooping low and skimming directly over the crocodile-filled waters. We also came across a lone Proboscis Bat resting on a tree trunk, something that they are usually seen doing during the daytime.

Because of all of the bats, birds, crabs, crocodiles, and other interesting creatures that we saw that night, I thoroughly enjoyed our unusual nighttime mangrove tour and would highly recommend it to anyone wishing to observe nocturnal Costa Rican wildlife.