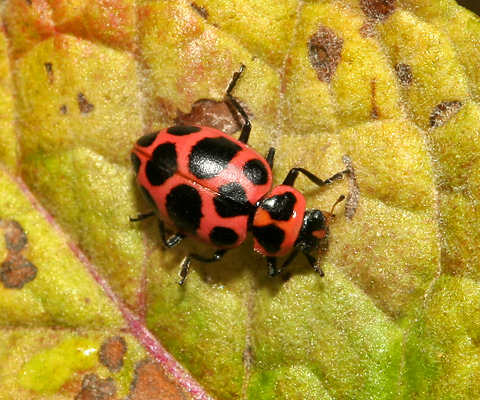 Despite their unusual pink coloration, Twelve-spotted Lady Beetles are actually ladybugs just like the more familiar bright red and black-spotted species and even have the typical rounded shape of a ladybug. The bright colors of Twelve-spotted Lady Beetles and other ladybugs are a form of aposematic coloration meant to warn potential predators that they taste foul and may even be somewhat toxic to very small animals. Birds and animals will generally avoid insects with black and bright orange, red, pink, or yellow markings.

Twelve-spotted Lady Beetles are not only colorful and attractive, they are also, as are ladybugs in general, highly beneficial insects because both the adults and the alligator-like larvae feed on aphids and other small plant pests. In fact, Twelve-spotted Lady Beetles have such a voracious appetite for aphids that they are sold commercially as a form of natural aphid control. Although they do adore aphids, the adults will also eat flower pollen.