Proboscis Bats (Rhynchonycteris naso) can be found in mangrove swamps and lowland riparian forests near water from southeastern Mexico to the northern part of South America. I observed this Proboscis Bat during a nighttime boat tour of the Isla Damas mangrove swamp near Quepos, Costa Rica. 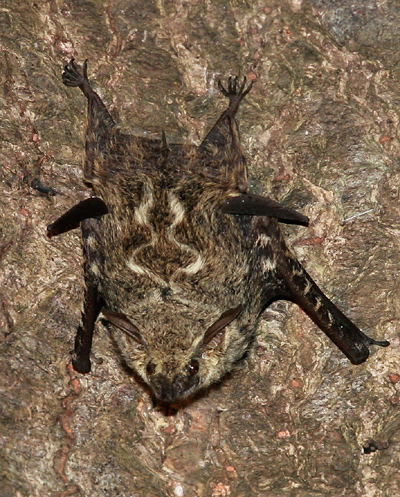 Proboscis Bats are very small, only up to 2 1/3 inches (5.9 cm) long for the slightly larger females, and they are named for their elongated snout and long, pointed nose. Proboscis Bats have a thick coat of grizzled brown to gray-brown fur with two mirrored, wavy, white stripes along their back. They also have distinctive tufts of light-colored fur on their forearms and a small, pointed tail.

During the day, small groups of these nocturnal bats are often seen roosting head-down in a vertical line on the undersides of tree trunks leaning over the water. Proboscis Bats can also be seen roosting singly as well. With their grizzled, brownish fur and small size, these bats can be surprisingly well-camouflaged on tree bark and quite difficult to spot. At night, Proboscis Bats can be seen flying just over the surface of the water as they hunt for insects.