Silver-banded Hairstreak (Chlorostrymon simaethis) butterflies range from the southern United States down to Argentina. Here in Arizona, these small butterflies are found in the southern and western part of the state. In early November of 2007, I observed this Silver-banded Hairstreak sipping nectar from autumn wildflowers along the San Pedro River in St. David, Arizona. 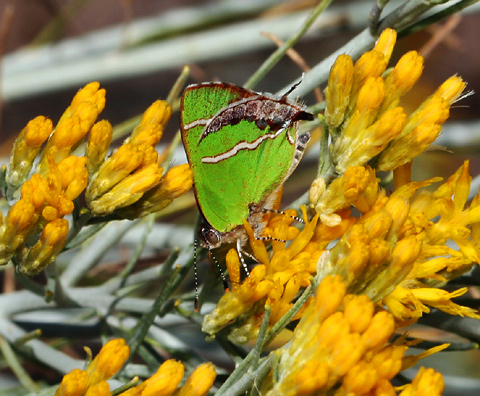 Silver-banded Hairstreaks have emerald green ventral wing surfaces with a distinctive, brown-edged, broad silver band across both the forewings and the hindwings. The ventral hindwings each have a slender "tail" and a crescent of mottled or faintly spotted brown along the far edge of the wing. The similar Juniper Hairstreak (Callophrys gryneus) and Xami Hairstreak (Callophrys xami) lack this crescent of brown on their hindwings, and the silver-white band across their ventral wing surfaces is much narrower and only edged with brown on one side.