While I was photographing yellow Persian Buttercups or Ranunculus (Ranunculus asiaticus) in February of 2006, I spotted a green, winged aphid (Superfamily Aphidoidea) exploring the brilliant yellow petals. 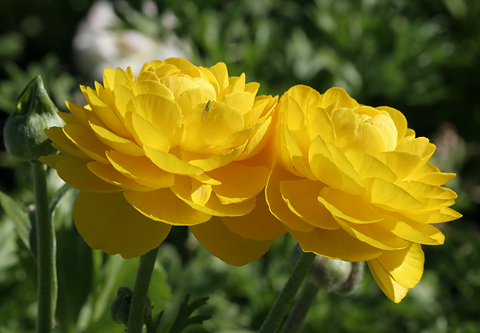 February seems a bit early for aphids, but this one was already out exploring for new feeding grounds. Aphids are usually wingless, but winged aphids can be found, and they will fly off to establish new colonies early in the season or when conditions become too crowded on a heavily colonized plant.

Most aphids can be distinguished from other small insects by the presence of a pair of body tubes called siphunculi or cornicles at the rear of the abdomen. One of these tubes can be seen on the winged aphid below. 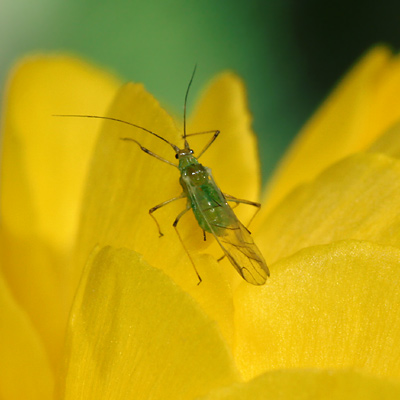 Aphids feed on sap and are common plant pests during the warm part of the year. The aphid life cycle is unusual and actually quite fascinating. Many aphid species reproduce by cyclical parthenogenesis (virgin birth), which is alternating asexual and sexual reproduction.

Most aphid reproduction is by parthenogenesis, where the daughter is a clone of the mother, so the vast majority of aphids are females, and most are wingless. These female offspring are born live (not as eggs), and since aphids have a telescoping of generations (a granddaughter is already developing within the unborn daughter and so on), these female offspring are born pregnant. This allows them to produce huge numbers of offspring within a short period of time, which helps make aphids quite difficult to control.

Amazingly, these females can also give birth to male aphids without having mated because they have an XO sex determining mechanism. Aphids with two X chromosomes (XX) are females, and those with only one X chromosome (XO, the O shows it's missing) are males. A special type of meiosis occurs in the female to produce male offspring with only one X chromosome, and this usually occurs late in the season. Mated females will produce eggs that can better over-winter or survive dormant during other harsh environmental conditions.