Whirligig Beetles (Family Gyrinidae) are common, predatory aquatic beetles often seen schooling in the shallow water at the edges of lakes and ponds. Occasionally, these beetles can show up unexpectedly in other places, such as in swimming pools. Fortunately, unlike Backswimmers (Family Notonectidae), which can also appear in swimming pools, Whirligig Beetles do not bite humans and are not at all aggressive towards them, although these agile swimmers can be difficult to capture. 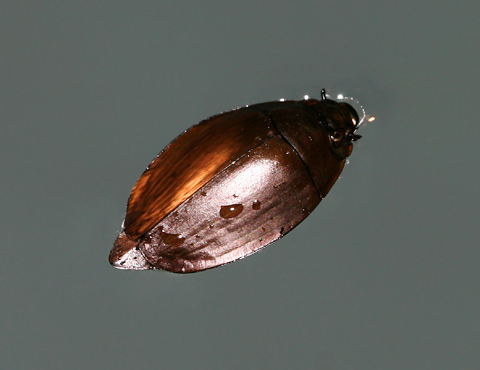 In August of 2007, I spotted this faintly lined Whirligig Beetle (Dineutus sublineatus) zipping around on the surface of my swimming pool one night (which is why the pool water appears gray instead of its normal daytime blue). After photographing it, I netted the Whirligig Beetle out of my swimming pool and dropped it into my small wildlife pond, a much more appropriate and natural place for an aquatic beetle.

Whirligig Beetles are oval-shaped and black to blackish brown in color with tiny, clubbed antennae, a pair of long forelegs that are often tucked under the body, short, paddle-like middle and hind legs that are used for swimming, and horizontally divided eyes that are specially adapted to see both above and below the water at the same time. When seen from certain angles, this particular beetle's blackish wing covers had an unexpected coppery metallic gleam.

Whirligig Beetles are named for their strange habit of whirling around in circles on the surface of the water when disturbed. Schools of madly whirling Whirligig Beetles can confuse potential predators and make it difficult for them to single out any particular individual beetle.

There are two genera of Whirligig Beetles common here, Dineutus and Gyrinus. Dineutus species like the one above are larger, all over 1/3 of an inch (0.8 cm) in length, while Gyrinus species are all smaller than this. Different species of Whirligig Beetle can sometimes be seen together, making their size differences more apparent.