Backswimmers or Back-swimmers (Family Notonectidae) are common in ponds and other still waters here in southeastern Arizona and throughout most of the rest of North America. I spotted this and several other red-eyed Backswimmers in a small pond here in Tucson, Arizona in October of 2006. Backswimmers seem to be the most numerous here in the fall before the first frost. 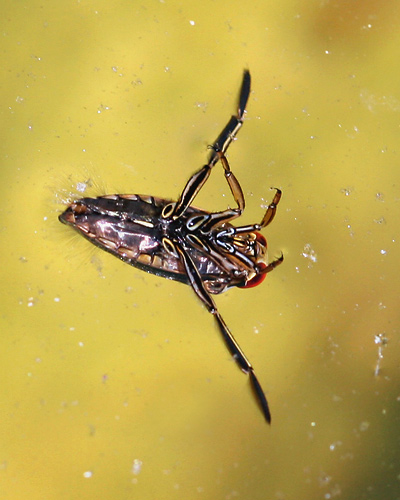 Backswimmers get their common name from their characteristic habit of swimming on their backs. Although they must surface for air, they often swim around below the surface of the water. These aquatic bugs have large, oar-like, hair-fringed hind legs that are used to propel them through the water and piercing, beak-like mouthparts that they use to feed on their insect prey. Although they may look a bit different from the other, more typical family members like Assassin Bugs and Kissing Bugs, Backswimmers are also true bugs (Order Hemiptera). The various species of Water Boatman (Order Hemiptera, Family Corixidae) look similar to Backswimmers and also have oar-like hind legs, but Water Boatmen swim right-side up instead of upside down like Backswimmers.

To find new freshwater ponds, swarms of Backswimmers will fly on moonlit nights and search for the reflection of moonlight on water. Since they apparently can't distinguish between a swimming pool and a natural pond at night, Backswimmers will often end up in swimming pools, where they can be seen darting around under the water and hunting for drowning insects. Unfortunately, Backswimmers do not like to share their swimming pool with anyone, especially humans, and they will aggressively chase after and bite anyone who gets too close to them in the water. I've been bitten by Backswimmers a couple of times, and their bites feel like a quick poke with a needle. We call them "water bees" because of their stinging bites and aggressively defensive behavior.

Any Backswimmers found in swimming pools should definitely be scooped out with a pool net to prevent them from biting swimmers, but it's best not to kill them because they are actually highly beneficial and absolutely voracious predators of mosquito larvae in freshwater areas. Scooped out Backswimmers will quickly fly off in search of another water source, hopefully one with mosquitos. With their large eyes and ability to swim quickly, Backswimmers are easily able to spot and capture the aquatic insects and larvae that they feed on. These aggressive predators will even capture prey much larger than themselves.

Backswimmers really do help reduce the mosquito population, and the pond where I found this one above had no mosquito larvae left in it, while a nearby pond without Backswimmers was just full of them.