Here in southeastern Arizona, Purple Martins (Progne subis hesperia) are common summer residents in desert areas with plenty of Saguaros (Carnegiea gigantea) with woodpecker holes for them to nest in. Most Purple Martins will arrive here in mid-May and depart southward by the end of September. They will begin breeding here in July with the arrival of our summer monsoon rains and the resulting increase in the insect population, especially dragonflies (a Purple Martin favorite). Soon after a summer thunderstorm subsides, Purple Martins can be seen flying about and the dark males heard twittering as they dart and swoop overhead hunting for flying insects like the swarms of winged termites and ants brought out by the rain. 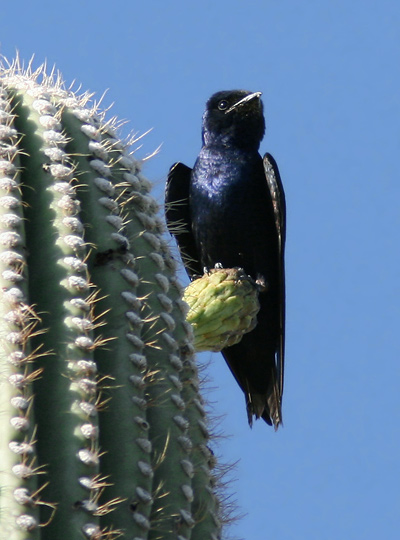 The Purple Martin is the largest swallow (Family Hirundinidae) in North America, and like other swallows, they are sleek-bodied, aerial insect hunters with long, pointed wings and a wide, gaping mouth for scooping in insects. Male Purple Martins are solid black with a blue, violet, or purple iridescence that is visible in direct sunlight. It takes two years for a male to reach his adult coloration, and until then, the subadult male is grayish below with variable spots and patches of purplish black. 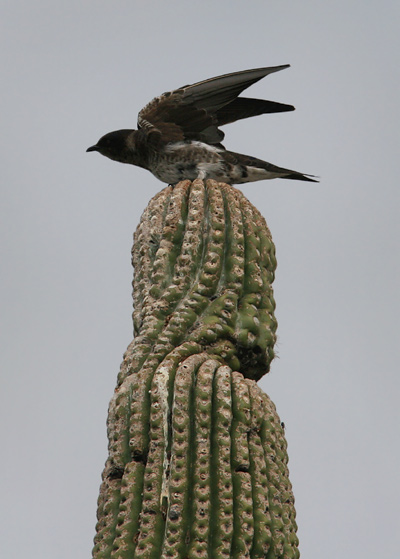 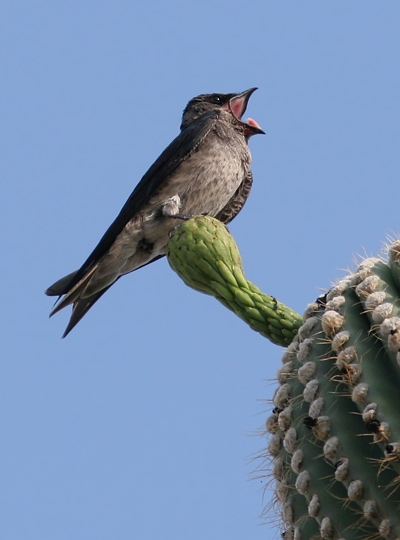 The Purple Martins found here in the Sonoran Desert are a unique subspecies, P. subis hesperia, and unlike the highly colonial Purple Martins found in the eastern United States (P. subis subis), our desert Purple Martins are only loosely colonial and will not nest in crowded, human-made Purple Martin houses or gourds, preferring instead to nest a bit farther from each other in either adjacent Saguaros or in the well-separated arms of a massive Saguaro. In August of 2007, I discovered this colony of nesting Purple Martins in a giant Saguaro near Saguaro National Park East in Tucson, Arizona. 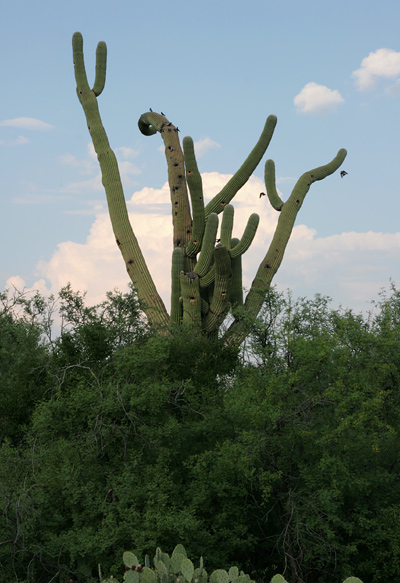 There were several pairs of Purple Martins in each of the Saguaro's massive arms, and I observed them bringing insects (mainly dragonflies and wasps) back to the hungry chicks waiting inside the nesting holes. Even though it too contained nesting holes, a favorite gathering spot for the busy adults of the colony was on the top of a drooping Saguaro arm, itself the size of an average Saguaro. 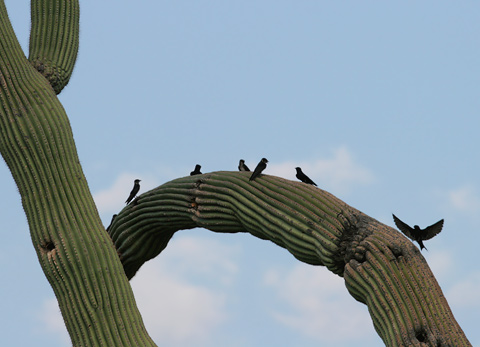 Although they like the company of other Purple Martins, our desert Purple Martins are rather territorial and defensive of their nesting holes, and I did observe them squabbling over nesting holes even though the holes were well-separated from each other due to the spread of the massive Saguaro's arms. 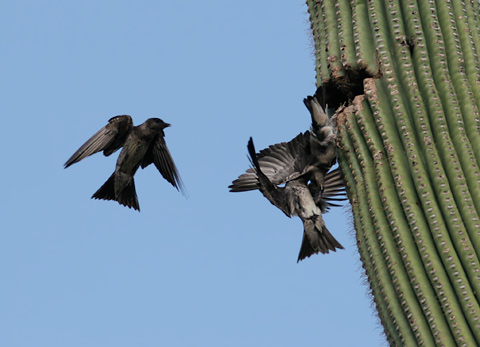 Not only do Saguaros have spines to deter climbing bird predators, their thick, water-filled, succulent flesh provides cooling insulation from the baking heat of the Sonoran Desert summer, allowing our desert Purple Martins to nest here in relative comfort.