Botta's Pocket Gophers have numerous geographic subspecies, and those pictured here are the subspecies T. bottae catalinae from the Santa Catalina Mountains north of Tucson, Arizona. 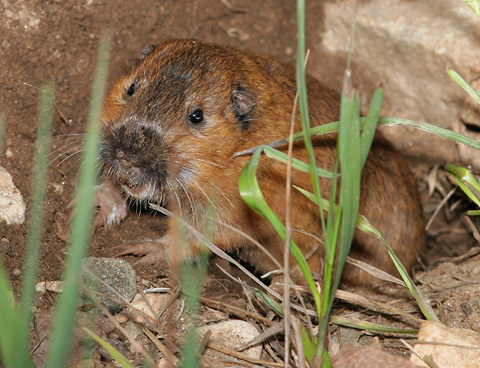 On July 21, 2007, we observed these Botta's Pocket Gophers in a meadow at the 9,157 foot (2791 m) summit of Mt. Lemmon in the Santa Catalina Mountains. It was overcast that day on the mountain and the summer monsoon storms were threatening nearby, but despite the weather and perhaps because of it, the Botta's Pocket Gophers were amazingly active. We observed them scampering through the grass and popping in and out of their holes.

To get some photos of the busy and rather wary gophers, we tossed a few nuts and sunflower seeds (our lunchtime snacks) outside of some of the open burrows, and led by their sensitive, eagerly twitching noses, the Botta's Pocket Gophers soon emerged to hurriedly gather up these prized food treats. 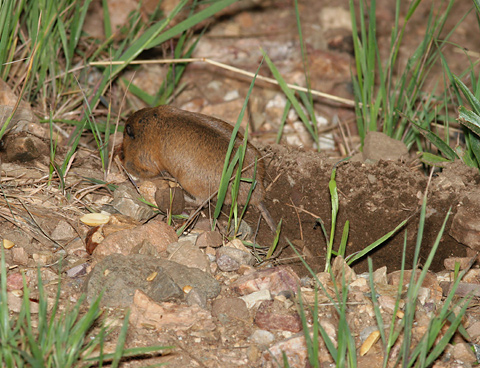 Pocket Gophers (Thomomys spp.) are named for the external, fur-lined cheek pouches on either side of their mouth that serve as pockets for carrying food (plants, roots, bulbs) back to store in their burrows where they can eat it in relative safety. Even though they spend the vast majority of their time underground, Pocket Gophers still have to emerge to gather food and find mates, so quite a few of them end up being captured by their many predators.

Throughout their range, Botta's Pocket Gophers are quite variable in their coloration, ranging from brown to blackish to grayish to even white. Those found here in Arizona are generally varying shades of brown with a white chin. Botta's Pocket Gophers are plump with short legs, a mostly hairless, up to 3.75 inch (9.5 cm) long tail, small eyes with relatively poor vision, small ears, long, catlike whiskers that help them feel their way through the extensive tunnel systems in their dark underground burrows, and long, slender claws on their forefeet that are used for digging. 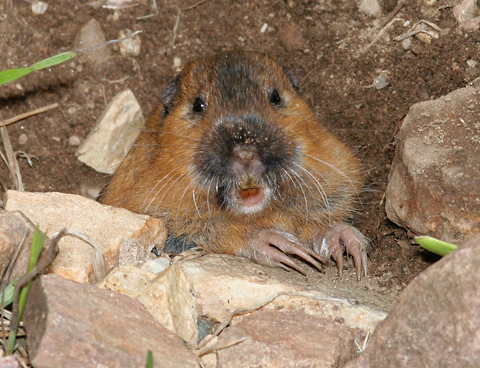 Botta's Pocket Gophers also use their large, yellow-orange, chisel-like paired front teeth for digging. Conveniently, their lips actually close behind their front teeth so that their mouth does not fill up with dirt as they dig. Botta's Pocket Gophers have mostly smooth, ungrooved upper incisors, and they are so severely bucktoothed that they are unable to completely close their mouth. 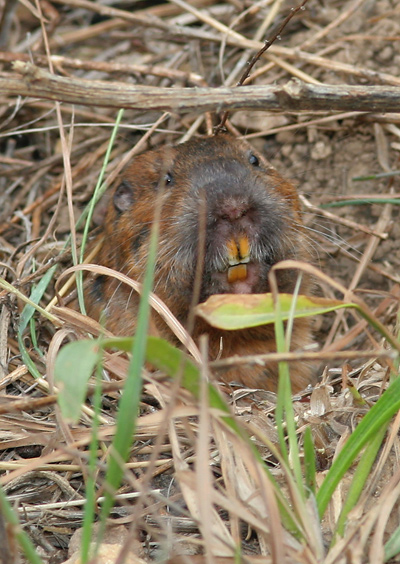 Here in southeastern Arizona, Botta's Pocket Gophers are best identified by their general size, brown coloration, and by where they live. The Pocket Gophers found in the Tucson area and in the Santa Catalina and Rincon Mountains are Botta's Pocket Gophers, while the similar, but smaller Southern Pocket Gopher (Thomomys umbrinus intermedius) is only found here in the low and mid-elevation oak woodlands of the Atascosa, Huachuca, Pajarito, Patagonia, and Santa Rita Mountains.