Although they are native to southern Asia and India, Bridled House Geckos or Common House Geckos (Hemidactylus frenatus) are now common in many tropical areas around the World. These sneaky little lizards were accidentally introduced to many other areas after they hid in cargo containers and stowed away on boats and ships. Bridled House Geckos are human commensals (they benefit from their association with humans and human structures), and these nocturnal, insect-eating lizards are often found in populated areas with bug-attracting outdoor lighting. 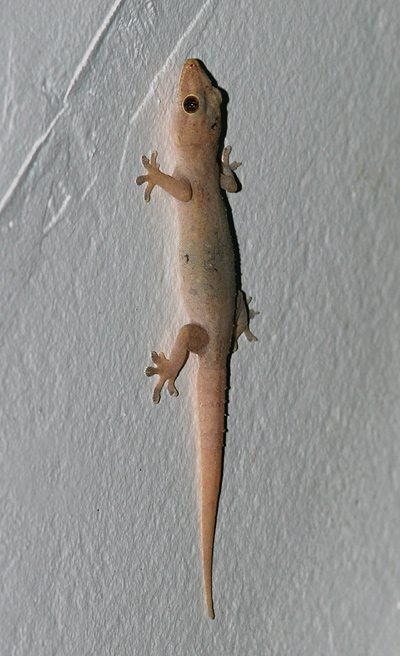 Bridled House Geckos are brown to pinkish brown in color with uniform to marbled patterning, and they have large toe pads and the bulging, lidless eyes that are typical of nocturnal Geckos (Family Gekkonidae). Their enlarged, adhesive toe pads allow them to easily climb smooth vertical surfaces and run around on ceilings, which makes them a real challenge to capture if they sneak into your house or hotel room. 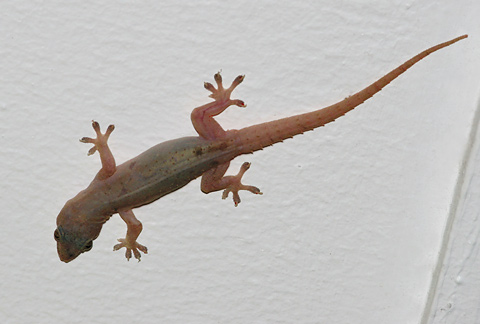 Although these characteristics can be difficult to see without a close-up view, Bridled House Geckos also have vertically elliptical pupils and non-retractable claws. Unlike some other Geckos such as the Mediterranean House Gecko (H. turcicus), Bridled House Geckos do not have large, conspicuous tubercles on their back, but they do have distinctive widely spaced rings of pointed tubercles encircling their tail.

Although they are also found in Costa Rica, the similar Mourning Gecko (Lepidodactylus lugubris) and the Fox, Indo-Pacific, or Boat Gecko (H. garnotii) lack these rings of tubercles on their tail and instead have only a single row of saw-toothed scales along either side of their tail.

Although some do hiss when angry, lizards are generally silent. However, Geckos are a notable exception, and they are amazingly vocal for such small lizards. The loud, chirping calls of Bridled House Geckos are a common sound on warm, humid evenings in the tropics, and since they will sneak into houses, you may even wake to find one chirping in your bedroom at night.