The Mediterranean House Gecko or Turkish Gecko (Hemidactylus turcicus) is a nocturnal lizard of the gecko family (Gekkonidae) that is originally from the areas around the Mediterranean. 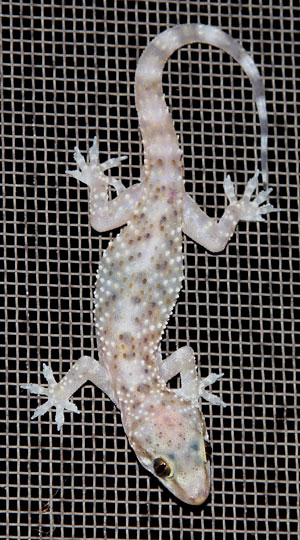 Mediterranean House Geckos have been introduced to urban Tucson, Arizona, likely as escaped pets, and they can be observed hunting for moths and other insects on lighted windows at night.

Tucson also has a native gecko species, the Western Banded Gecko (Coleonyx variegatus), but these nocturnal geckos are usually found in areas with more natural vegetation. Unlike native Western Banded Gecko with their smooth backs, Mediterranean House Geckos have distinctive, round, raised bumps along their backs.

Mediterranean House Gecko prefer irrigated, densely-planted gardens, and large numbers of them can be found in places where the conditions are right. The house in Tucson where this photograph was taken has a walled, tropical garden, and at night, up to 20 Mediterranean House Geckos cover the screened porch and windows to the garden. With only one light on in the house at night, the geckos will swarm that lighted window, and often two or more geckos will capture the same large moth, resulting in tug-of-war battles where only one victorious gecko gets the moth body and the rest just get the wings.