Crab-eating or Long-tailed Macaques (Macaca fascicularis) are native to the islands and some mainland areas of Southeast Asia. These monkeys are generally found along the edges of the tropical rain forest near rivers or along the coast in mangrove swamps and in coastal forests. These particular Crab-eating Macaques were scattered along the many limestone rocks at the edge of the reservoir in Khao Sok National Park, Thailand. 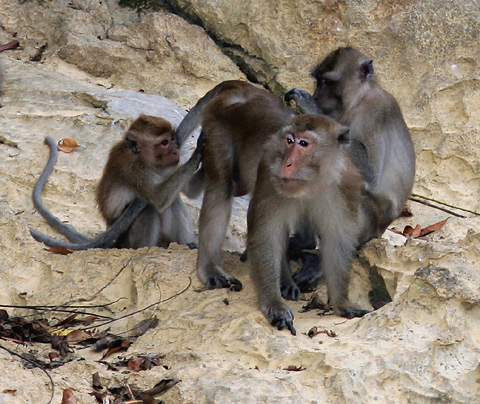 Crab-eating Macaques are varying shades of medium brown and gray above and tan to light gray below. Adult Crab-eating Macaques can be identified by their nonprehensile, unusually long tail (longer than their body), brownish pink face, area of white above and between their brown eyes, and by their bushy side whiskers. The young are born with blackish fur, but they will begin to turn a lighter brown color after a few months.

Crab-eating Macaques live in large groups of both males and females with strong dominance hierarchies and complex social interactions. The females will remain in their birth group for life and have matrilineal dominance structures, with ranking status being passed from mother to daughter. The higher ranking females have greater access to food and greater reproductive success than the lower ranking females. 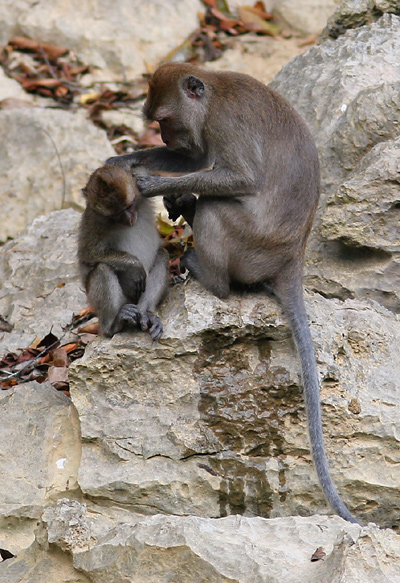 Unlike the matrilineal females, the males will move from group to group, and when fully physically and socially mature after about 7 years of age, they will fight with each other to establish dominance. The highest ranking male fathers most of the young in the group during his time in power. These highly social monkeys can often be seen reinforcing their social bonds and hierarchies by frequently touching and grooming each other to remove parasites. The higher ranking members of the group receive the most grooming, but all group members receive at least some grooming. 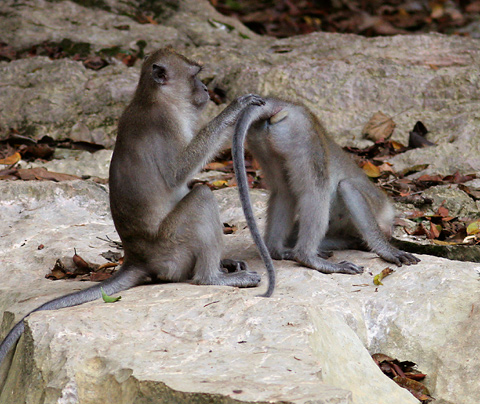 Although Crab-eating Macaques mainly eat fruit, they are actually omnivores and will eat a wide variety of other foods, including crabs, insects, and bird eggs and young. They will also readily invade human settlements to raid gardens, crops, and garbage cans.

Crab-eating Macaques not only prefer to live near water, they will often swim in it as well, including the smaller juveniles like this one below. 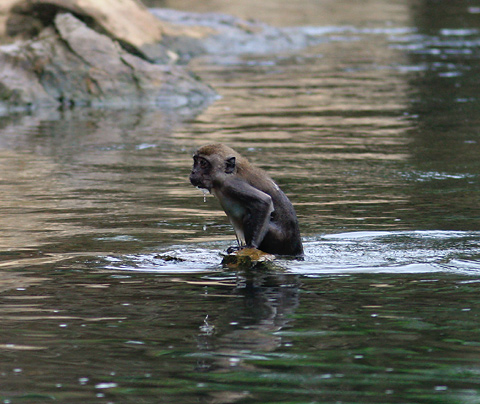 Despite their swimming and desire to be near water, these Crab-eating Macaques didn't seem to like being rained on (Khao Sok National Park is a very rainy place) and they would take shelter in the trees to escape the rains. 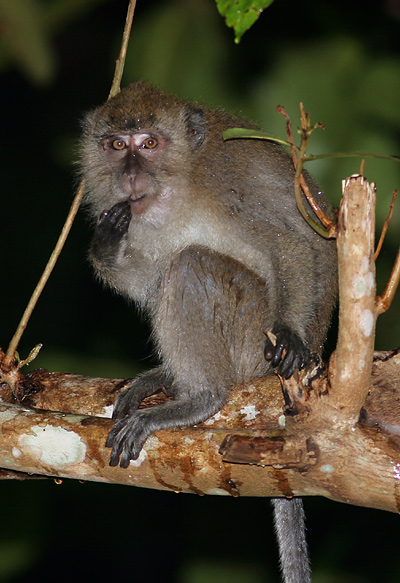