Palmer's Agave or Palmer's Century Plant (Agave palmeri) is a perennial succulent native to southeastern Arizona, southern New Mexico, and northern Mexico. Here in southeastern Arizona, Palmer's Agaves grow at elevations between 3000 and 6000 feet (914 and 1829 m) in the mountain foothills, upland grasslands, and oak woodlands. With their towering, up to 20 foot (6 m) tall flower stalks, Palmer's Agaves are quite conspicuous and easy to spot when they are blooming here in the late summer. I spotted this pink-flowered Palmer's Agave below in early September of 2007 in the northern foothills of Arizona's Santa Rita Mountains. 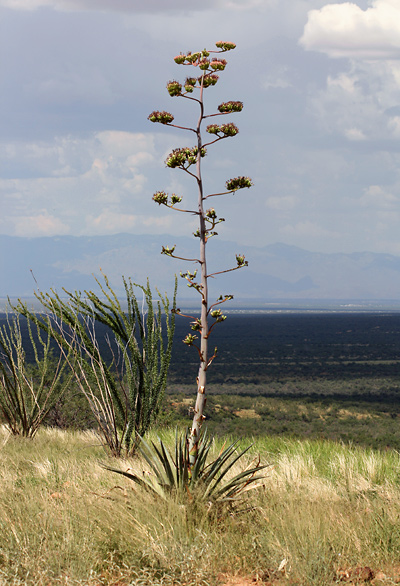 Palmer's Agaves are monocarpic, meaning that they will flower just once and then die after producing seeds. Even though they are commonly called century plants, Palmer's Agaves only live for 5 to 25 years before using up all of their lifelong stored energy to produce a giant flowering stalk. The flower stalks carry panicles of 6-segmented, green, pale pink, or yellowish flowers. The flowers smell like overripe or fermenting fruit and are filled with sweet nectar to attract pollinators. 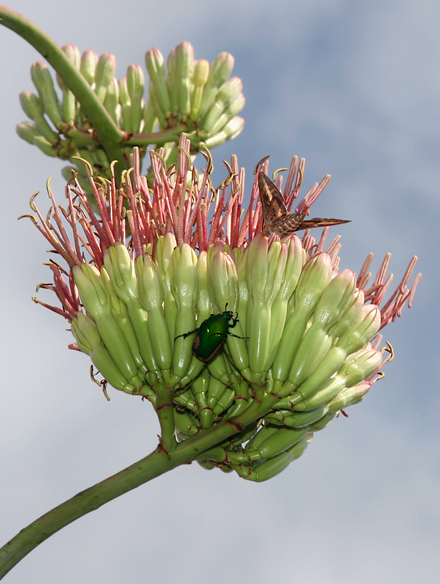 During the day, the nectar-filled Palmer's Agave flowers are visited by bees, butterflies, hummingbirds, orioles, and even a few normally nocturnal moths like this White-lined Sphinx (Hyles lineata). The Figeater Beetle (Cotinis mutabilis) above was chewing into the base of the flowers to steal nectar without ever pollinating the flowers. Many of these daytime visitors to the flowers, especially the smaller ones like nonnative Honeybees (Apis mellifera) that can slip into the flowers without touching the anthers or pistils, are relatively poor pollinators of Palmer's Agave flowers. Some of their larger daytime visitors do a bit better job of pollinating the flowers, but the most important pollinators of Palmer's Agaves are their nighttime visitors.

Palmer's Agaves are chiropterophilous, meaning that they are pollinated by bats. In fact, because bats are such an important pollinator for them, Palmer's Agaves are mostly found growing in areas with nectarivorous bats (bats that feed on flower nectar). There are two species of nectarivorous bats found here in southeastern Arizona, the threatened Mexican Long-tongued Bat (Choeronycteris mexicana) and the endangered Lesser Long-nosed Bat (Leptonycteris curasoae yerbabuenae). Lesser Long-nosed Bats are more numerous here, which probably makes them the most important pollinator species for Arizona's Palmer's Agaves. 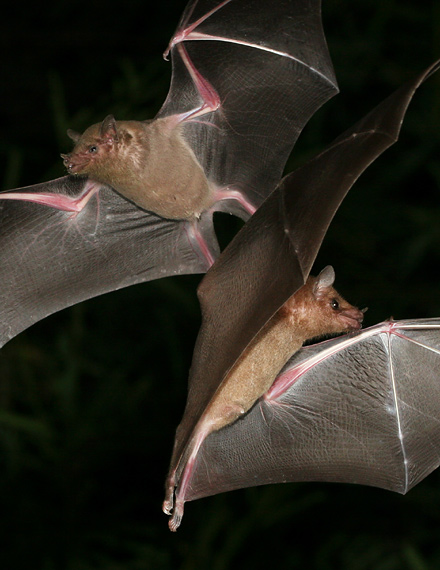 Lesser Long-nosed Bats are migratory pollinators, and those found here in Arizona follow a "nectar corridor" of blooming agaves on their southward fall migration down to south-central Mexico.

The pollinated Palmer's Agave flowers are followed by panicles of plump, green fruits that look like baby bananas. I have noticed that Palmer's Agaves in areas with plentiful Lesser Long-nosed Bats, such as in the Santa Rita Mountains, seem to set the most fruit. 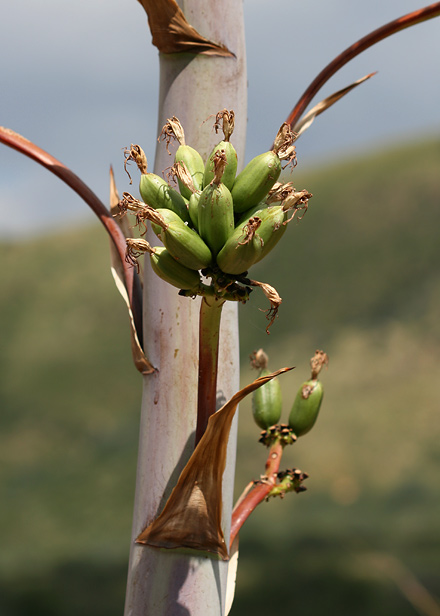 The green Palmer's Agave fruits dry to a brown color as they mature and the plant dies. The dry fruits will split open to release the flat, black, watermelon-like seeds. 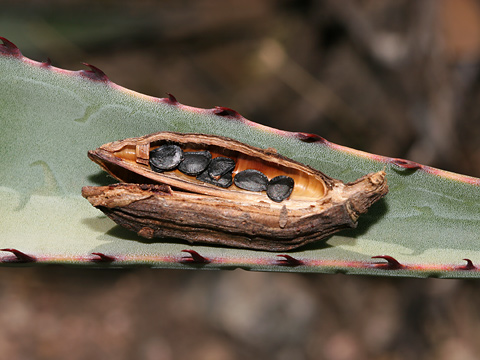 Although their towering stalks of bat-attracting flowers are quite spectacular, Palmer's Agaves spend most of their lives as much less spectacular, but still quite attractive 3 foot (0.9 m) tall and 4 foot (1.2 m) wide rosettes of stiff, plump, grayish green leaves. 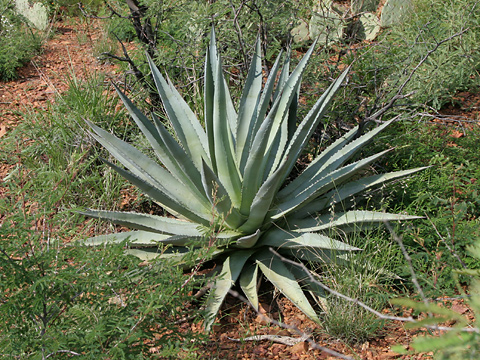 Care must be taken around Palmer's Agave plants because the leaves are each tipped with a stout, needle-like spine and edged with sharp, curved, reddish brown teeth. 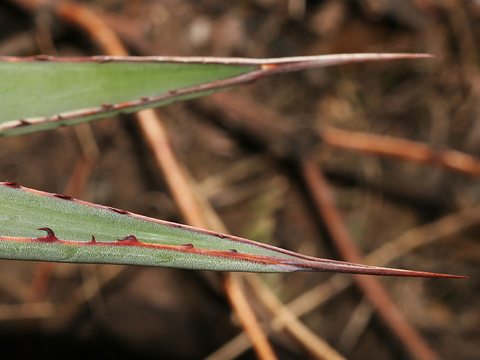 I have been accidentally stabbed in the leg by a Palmer's Agave leaf, and it was a painful, bloody experience that I wouldn't want to repeat. The beautiful and dramatic blooming Palmer's Agaves are easy to spot and avoid, but the smaller, non-blooming young ones can be surprisingly difficult to spot if they are tangled in dense, upland brush. Be sure to keep an eye out for them if you are in an area where they are common.

Although they can be found scattered in upland areas in the Santa Catalina and Rincon Mountains near Tucson, Arizona, Palmer's Agaves are far more common in the areas further to the south and east of Tucson. The foothills of the Santa Rita Mountains south of Tucson are a great place to see Palmer's Agaves, especially when they are blooming.