With its iridescent emerald green, copper, and blue plumage and long, ornamental neck feathers known as hackles, the Nicobar Pigeon (Caloenas nicobarica) is one of the most beautiful species of Pigeon (Family Columbidae) in the World. Nicobar Pigeons are found on the Nicobar and Andaman Islands of India, the Solomon Islands, Palau, and on smaller islands off of the coasts of Myanmar, Thailand, Malaysia, Cambodia, Vietnam, Indonesia, and the Philippines. This particular Nicobar Pigeon was confidently strolling along the sunlit edge of a beach forest in Mu Ko Similan National Park in the Similan Islands of Thailand. 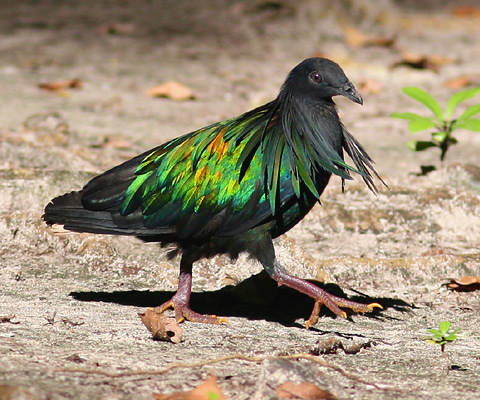 Like other birds with metallic iridescent plumage, Nicobar Pigeons are at their most beautiful in direct sunlight. In the shade, the iridescence on their back, wings, and hackles is much fainter and Nicobar Pigeons can appear to be mostly a solid dark gray color. Nicobar Pigeons are large, up to 16.5 inches (42 cm) long and have brown eyes, a blackish bill with a knob on top (larger in the males), a short, white tail, and the strong, stout legs typical of many terrestrial birds. A Nicobar Pigeon's stout legs and feet are reddish and tipped with unusual looking orange claws. Although they have broad, powerful wings and can be seen flying from island to island, Nicobar Pigeons are mainly terrestrial and prefer to run rather than fly, which puts them at increased risk from terrestrial predators.

Although colonies of Nicobar Pigeons breed only on very small, uninhabited, predator-free, forested islands, these large pigeons can also be found foraging for food on the forest floor near the coast in mainland areas and on other, larger islands nearby. 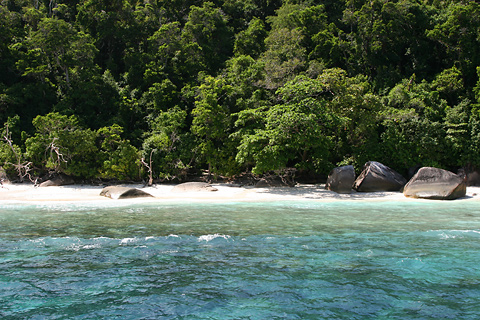 Even though Nicobar Pigeons are listed as near threatened by the IUCN due to habitat loss and degradation, hunting, collection for the pet trade, and the human-caused spread of non-native predators like rats and domestic cats, they are still one of the most commonly observed birds in the beautiful Similan Islands.