In Costa Rica, Yellow-green Vireos (Vireo flavoviridis) are spring and summer breeding residents in forested areas from the lowlands up to about 5000 feet (1524 m) in elevation. They are very common on the Pacific slope, but are more uncommon on the Caribbean slope. Yellow-green Vireos usually arrive in Costa Rica sometime in February and will depart by mid-October. Yellow-green Vireos are migratory and spend their summers from southern Texas in the U.S. through Mexico and Central America, and they spend their winters in the western Amazon basin in South America. 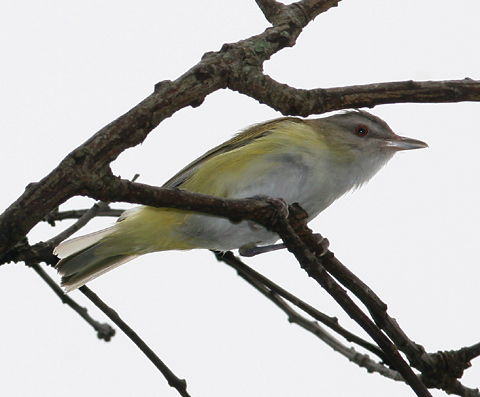 In May of 2007, we observed this Yellow-green Vireo in a tree in Alajuela, Costa Rica, where it would occasionally interrupt its busy hunt for insects amongst the leaves by flying down to a branch over our heads and giving us a curious, red-eyed glance. 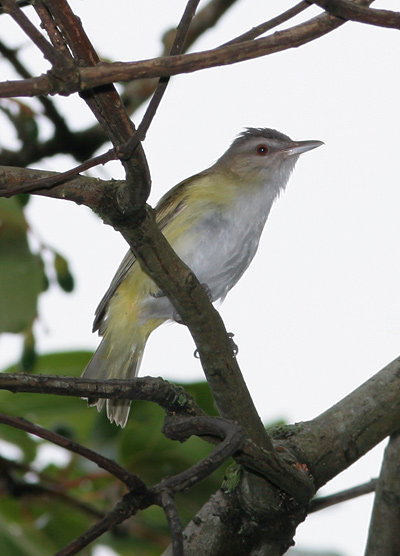 Yellow-green Vireos are dull olive green above and whitish below, and they have yellow sides, flanks, and a brighter yellow crissum, a darker edged gray crown, a whitish line over the eye, a gray eye-stripe, and red eyes. The similar Red-eyed Vireo (Vireo olivaceus), an abundant spring and fall migrant in Costa Rica, has a black eye-line, a black line edging its gray crown, and does not have the clearly yellow sides and flanks of the Yellow-green Vireo.

Yellow-green Vireos feed on insects and berries, and these active, vocal songbirds will frequently call and sing as they forage for food in the trees. This particular one was no exception and it frequently broke out into song between insects. 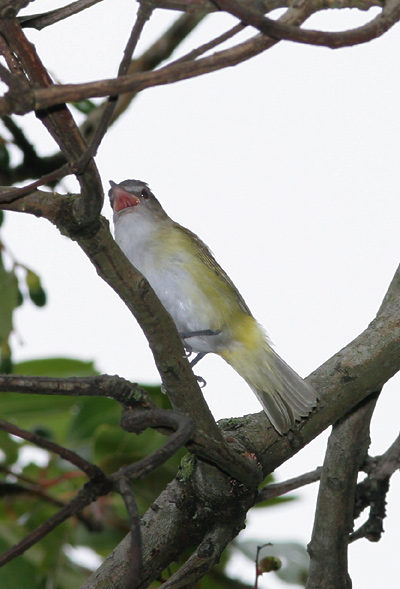 The calls of Yellow-green Vireos are buzzy and scolding-sounding, but their varied and repeated "Cheerit" songs are quite melodic.