Squirrel Cuckoos (Piaya cayana) are found throughout Costa Rica in second growth forests, at forest edges and openings, and in open woodland areas from the lowlands to the mountains. These large cuckoos are fairly common, but they are rather widely dispersed and are often solitary or found in pairs. Squirrel Cuckoos range from Mexico down to Argentina. We spotted this lone Squirrel Cuckoo flying from tree to tree in a hotel garden in Alajuela, Costa Rica. 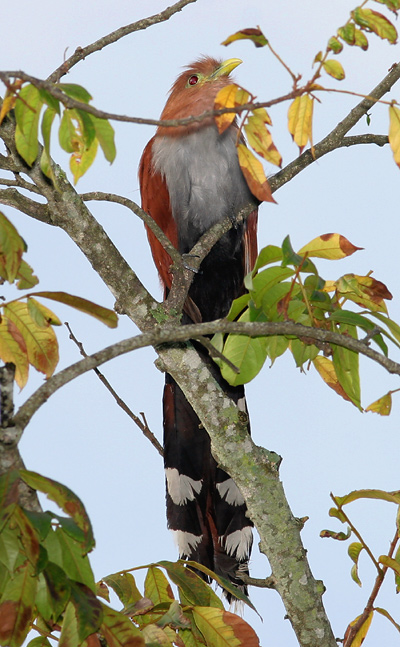 Squirrel Cuckoos are so named because they can be mistaken for squirrels as they run along tree branches or hop from branch to branch, and with their bright rufous coloration, they are the same color as most of the squirrels that we saw in Costa Rica. Squirrel Cuckoos are chestnut above and have a pale reddish throat, a gray chest, a black crissum, red eyes ringed by bare, yellow-green skin, a yellow-green bill, and a very long tail with a black underside and white-tipped tail feathers. The males and females are similar. 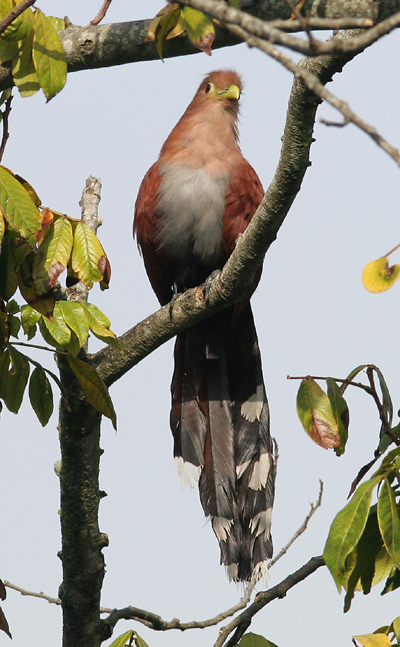 Unlike some Old World cuckoos, Squirrel Cuckoos are not brood parasites of other birds and will build their own nests and raise their own young. The young look similar to the adults but have a grayer bill and eye rings, browner eyes, and smaller white tips on their tail feathers.

Squirrel Cuckoos feed on large insects and spiders and small lizards, which they hunt for amongst the trees. Squirrel Cuckoos have a variety of loud calls, and even though I couldn't usually see them as I hiked the forest trails in the Alajuela area, I often heard a pair of Squirrel Cuckoos calling as they foraged up in the forest canopy.