Black-speckled Palm Pitvipers (Bothriechis nigroviridis) are found in the cool, moist, middle and high elevation forests of Costa Rica and Panama. These arboreal vipers are not often seen because not only do they live up in the trees where they are well camouflaged among the leaves, but they also have a rather restricted range and declining populations due to human encroachment (development, agriculture, etc.) into their montane forest habitats. 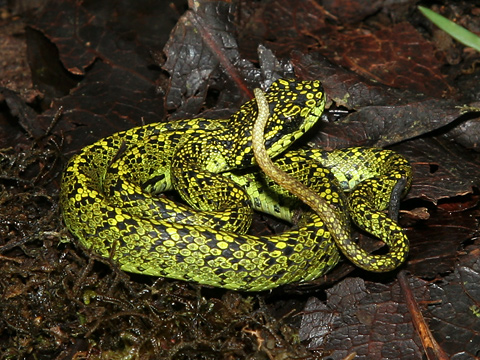 Black-speckled Palm Pitvipers are emerald green to less commonly yellow-green like this one and heavily speckled and mottled with black on their back and sides. They are mostly unspeckled below and have a black line behind their eyes. Their eyes are dark and speckled and have the vertically elliptical pupils that are characteristic of pit vipers. Their flexible, coiling tails are prehensile and aid them in their tree climbing lifestyle. 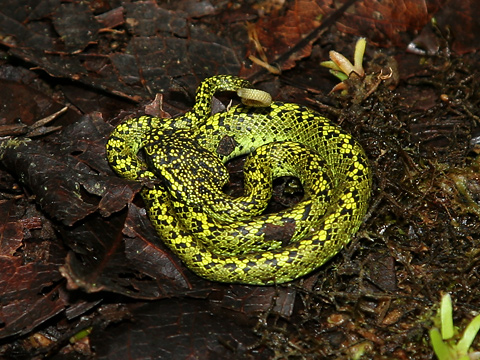 Black-speckled Palm Pitvipers are members of the venomous Pit Viper Family (Viperidae), Subfamily (Crotalinae), and like other family members, they have a broad, wedge-shaped head much wider than their neck, large, erectable fangs in the front of their mouth that these ambush predators use to inject venom into their prey or predators, and heat-sensing pit organs in front of their eyes that they use to detect warm-blooded prey. Unlike a terrestrial pit viper, which will often strike and then release its prey to track it down later after it's disabled, an arboreal pit viper like a Black-speckled Palm Pitviper will bite and then hold onto its struggling prey so that the dying prey doesn't fall out of the tree and either get lost or stolen by another predator lurking on the ground below.

I don't know what this little arboreal pit viper was doing on the ground, but with its bright yellow-green coloration, it was not well camouflaged in the brown leaf litter along the trail. Even small Black-speckled Palm Pitvipers like this one can be dangerous, so we didn't get within striking distance of it. We had been told that snakes were uncommon to see around San Gerardo de Dota, so we were quite surprised to see a venomous one of all things lurking in a nice, safe-looking open clearing along our hiking trail. 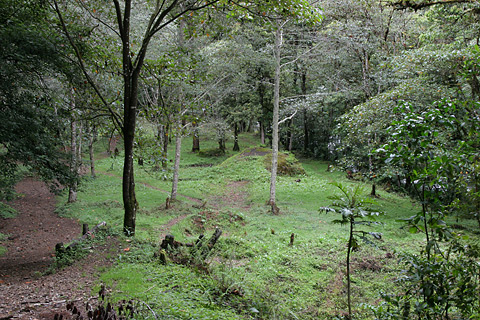 I like snakes and was thrilled to see this one, but some of the other guests at our lodge were less than thrilled to hear about our Black-speckled Palm Pitviper sighting, especially as they had been planning on hiking the same trail where we had seen it. However, our ground Black-speckled Palm Pitviper was an anomaly, and the rest of them were probably safely coiled up in the trees where they wouldn't bother or frighten passing hikers. Although, it would probably be a very good idea to be careful when poking around in dense foliage off of the trail there. 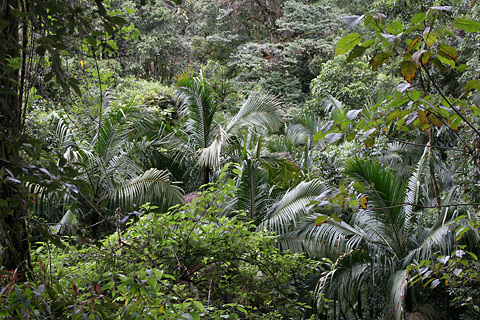 I don't know if Black-speckled Palm Pitvipers have any particular fondness for palm trees, but we did see a number of palms in the oak cloud forest, despite the often chilly temperatures there. This sort of dense vegetation is much better cover for a green-colored arboreal snake, so after discovering that its camouflage had failed and it had been discovered by nosy photographers, the Black-speckled Palm Pitviper sluggishly crawled off and later disappeared, hopefully up into the green trees where it belongs. 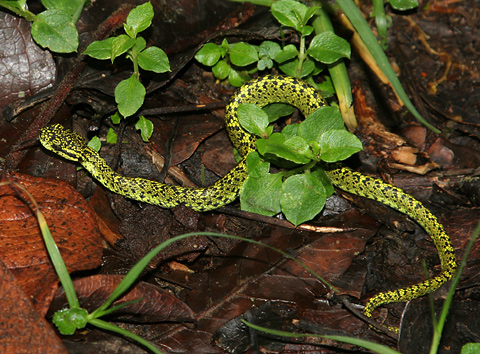