In Costa Rica, Torrent Tyrannulets (Serpophaga cinerea) are common along swift-flowing, boulder-strewn mountain streams on both the Pacific and Caribbean slopes. These small, riparian songbirds range from Costa Rica down to northern Bolivia and northwestern Venezuela. I observed this Torrent Tyrannulet along the Savegre River in San Gerardo de Dota, Costa Rica. 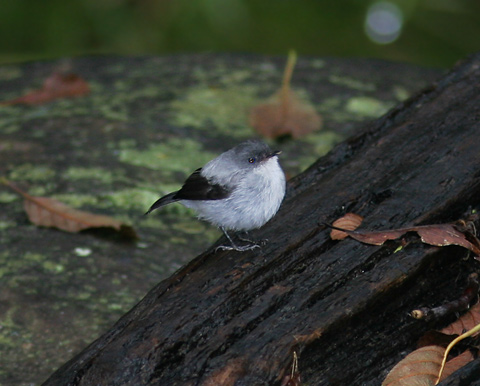 Torrent Tyrannulets are mostly gray, darker above and paler below, and have a white throat, a black tail, black wings with small, gray wingbars, a small, black bill, black legs and feet, and dark brown eyes. The males have a blackish crown and face and an often concealed white crown patch. The females are similar but have a grayer crown and face and a smaller or absent crown patch. I only observed this one Torrent Tyrannulet, and its feathers were so fluffed up that I couldn't be completely sure of its sex. 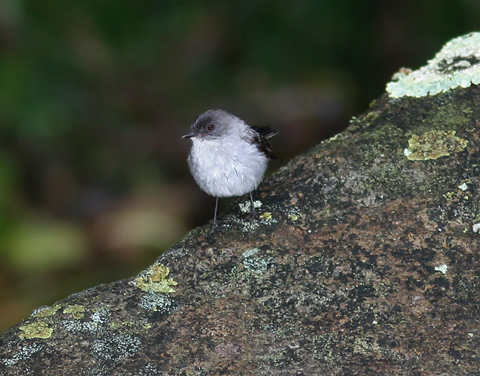 San Gerardo de Dota is just above 7000 feet (2134 m) in elevation in the oak cloud forest, and the weather was cold and drizzling that day, so this little Torrent Tyrannulet had puffed up its feathers to insulate it from the damp chill. Torrent Tyrannulets spend much of their time flying over the water from boulder to boulder (or fallen log) hawking for insects, so they can get a bit damp anyway. 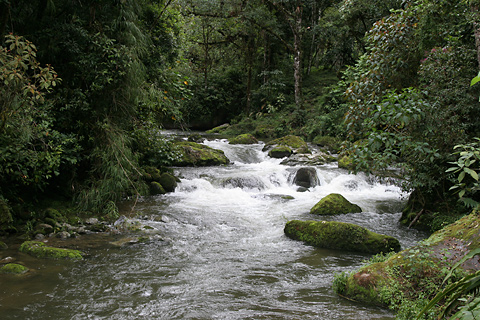 Although small, swift, and trout-filled in the San Gerardo de Dota area, the Savegre River (Rio Savegre) flows all the way to the Pacific Ocean south of Manuel Antonio, becoming much larger as it descends and slower-moving once it reaches the lowlands. Torrent Tyrannulets definitely prefer to live along the Savegre River in the mountains, where this river is much smaller, rockier, faster moving, and more streamlike.