One of the strangest looking mammals in Costa Rica is the Brown-throated Three-toed Sloth (Bradypus variegatus). These slow-moving animals have a proportionally small, round head, amazingly long arms, massive claws, and ratty-looking, moth-infested fur that will become covered in green algae during the rainy season. Since they spend almost all of their time hanging in trees, their fur hangs downward from their stomach instead of from their back like other mammals. 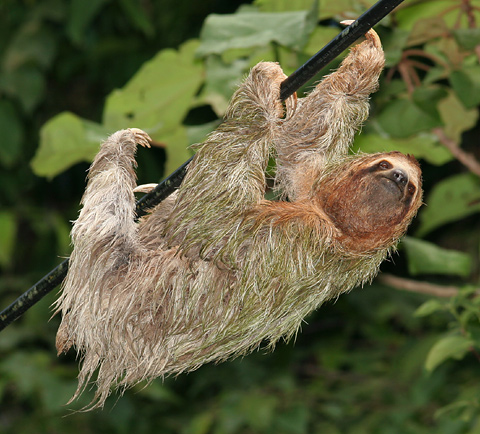 We observed this female Brown-throated Three-toed Sloth climbing down to the ground in Manuel Antonio National Park, Costa Rica, which is something that these leaf-eating, tree-dwelling sloths do only infrequently in order to defecate. It was during Costa Rica's rainy season, which is why this sloth's fur was damp and algae-covered. 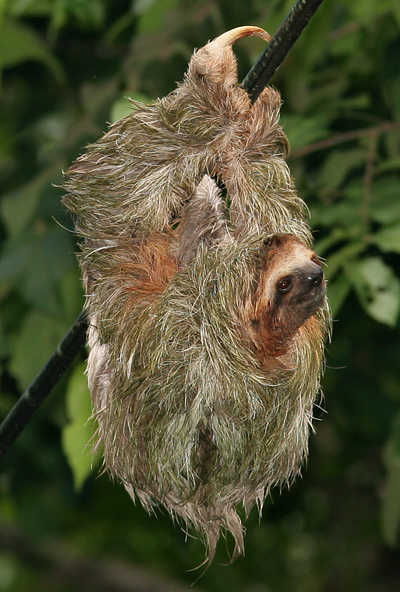 Brown-throated Three-toed Sloths are found in the warm, humid tropical forests of Central and South America. With their low body temperatures and slow metabolisms, these sloths need warm temperatures. Slow-moving, arboreal Brown-throated Three-toed Sloths are ungainly on the ground and at great risk from predators there, so they also need dense forests, especially those with lianas and vines that allow them to directly and safely travel from tree to tree. 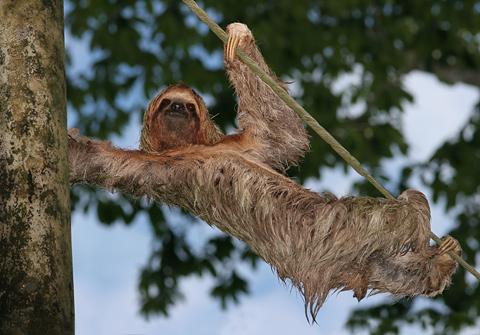 Brown-throated Three-toed Sloths will also happily use artificial lianas like this wire, but sadly, this habit can result in some of them being electrocuted by power lines. This one was fine though, and she climbed down and crawled off and disappeared into some bushes to do her business in private.