The Lesser Scaup (Aythya affinis) is a fairly common winter visitor to lakes and larger ponds here in southeastern Arizona. I spotted this male Lesser Scaup begging for handouts with the rest of the park ducks in Tucson's Lakeside Park in late December of 2006. 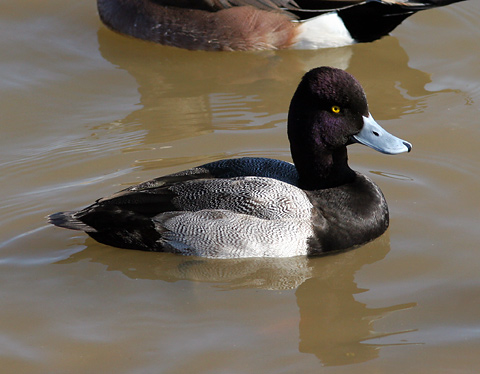 A male Lesser Scaup has yellow eyes, a finely barred gray back, whitish gray sides, and a black head, chest, and rump. Unlike the white-ringed bill of a very similar male Ring-necked Duck (Aythya collaris), the only marking on the otherwise plain gray bill of a male Lesser Scaup is a small, black tip.

Female Lesser Scaup are brown where the males are black and have a white ring of feathers around the base of their bills. They are very similar to female Greater Scaup.