I observed this Black Phoebe (Sayornis nigricans) at the Sweetwater Wetlands here in Tucson. 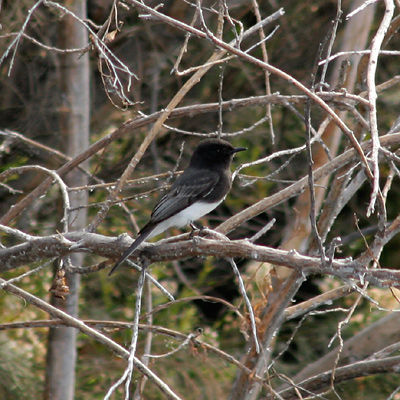 Black Phoebes are black above and white below and exhibit the characteristic phoebe tail-pumping and flycatching behavior. These lively flycatchers are usually found near water. 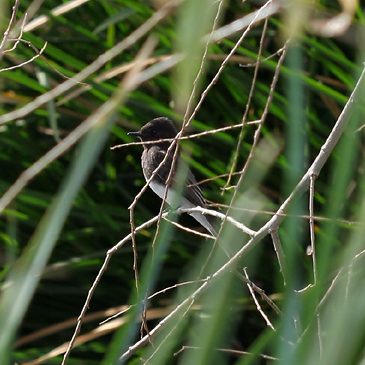 Despite the fact that Black Phoebes are tolerant of the presence of humans, I wasn't able to get very close to it, but I was able to crop my photos so that it is easily identifiable in them. I would have gotten more photos, but I was disturbed by a creepy bird-watcher who was quite literally creeping around the wetland paths like a stalking heron in super slow-motion. I had never seen anything quite like it before and decided to move on. I don't know why, but most of my weird bird-watching experiences have involved Black Phoebes.

I vividly remember seeing my first Black Phoebe. I had just moved to San Diego, California, and I was living in a dumpy beach cottage (more accurately described as a rat shack). One day, I was sitting on my deck bird-watching, when I saw a black and white bird fly by into my neighbor's yard. I quickly put my binoculars to my eyes and tried to find the bird in the binocular view. Instead, I just saw this strange beige thing moving around. I focused my binoculars on it and saw to my embarrassment that it was a naked man. It was my uninhibited neighbor taking a shower outside. I lowered my binoculars and saw him staring at me like I was a big pervert. I ran inside mortified. He must have thought that I was trying to get a super close-up view.

I later saw the black and white bird flycatching in my yard and identified it as a Black Phoebe. 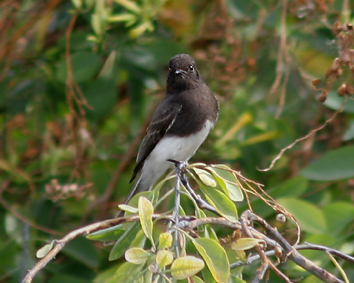 When I moved to a different house in San Diego, a pair of Black Phoebes used the mud at the edge of my waterlily pond to build a nest on the side of my house. I used to like to sit outside and watch them, but I learned not to do so with my binoculars when the neighbor children were home. They caught me one day with the binoculars and chanted "Peeping Tom, Peeping Tom!" over the fence until I went inside. I was peeping, but only on birds!