Southern Arizona has many species of tropical origin, remnants of the distant past when this area had a wetter, more tropical climate. One such species is the White-nosed Coati (Nasua narica), which is also known as the Coatimundi. 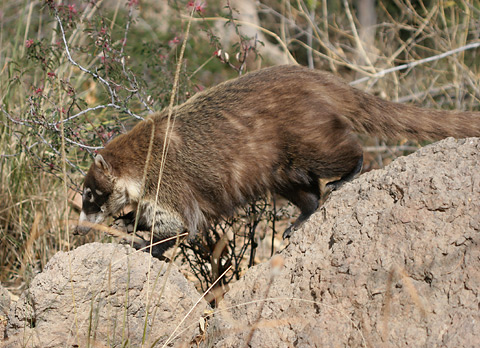 Of the two species of Coati, the other being the South American Coati (Nasua nasua), only White-nosed Coatis are found here in Arizona.

Coatis are in the Raccoon or Procyonid Family (Procyonidae). With their pointed snouts and ringed tails, these omnivorous mammals do look somewhat similar to the other members of this family found here in Arizona, the Northern Raccoon (Procyon lotor) and the Ringtail (Bassariscus astutus). However, a White-nosed Coati can easily be distinguished by its long, non-bushy tail, large size, longer snout, dark brown fur, and the fact that it is diurnal (active in the daytime). 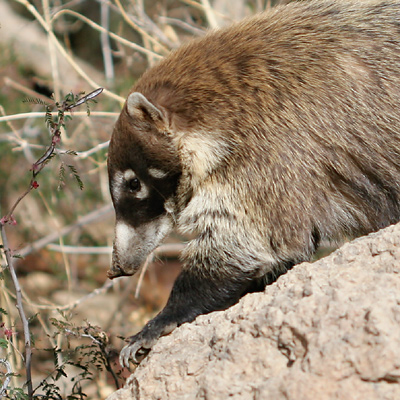 Female and young White-nosed Coatis travel in maternal bands, while the mature males are solitary, except during breeding season when the dominant male in the area will join up with a maternal band to mate with the females.

I photographed the captive White-nosed Coati in the above photos at the Arizona-Sonora Desert Museum's Coati exhibit, but I did once see wild Coatis near Tucson.

Last March, I observed a maternal band of White-nosed Coatis wandering up a hillside across from Molino Canyon Vista Overlook. Unfortunately, the Coatis were too far away for me to get decent photos of them, and instead I ended up with photos of Bigfoot sighting type quality (indistinct and blurry). 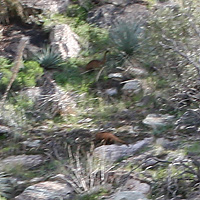 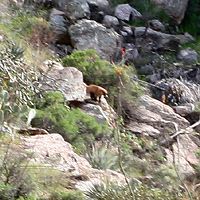 Luckily, I was able to view the White-nosed Coatis through binoculars, and they were very easy to identify and interesting to watch as they nosed and dug around for food (invertebrates, lizards, roots, fallen fruit or nuts, eggs, etc.) between the rocks. I'm hoping to someday get some decent photos of wild White-nosed Coatis, but I haven't seen them since. White-nosed Coatis are far more common in the mountains to the southeast of Tucson than in the Santa Catalina Mountains where I photographed these ones.