Giant Crab Spiders (Olios species) are large, nocturnal spiders. They are fairly common in desert areas around Tucson. These spiders don't spin webs, instead these wandering hunters will stalk and chase their insect prey. Giant Crab Spiders have a leg span of 2.25 inches (5.7 cm) or more, but despite their large size, they are excellent climbers and are often found crawling around on walls and even ceilings. 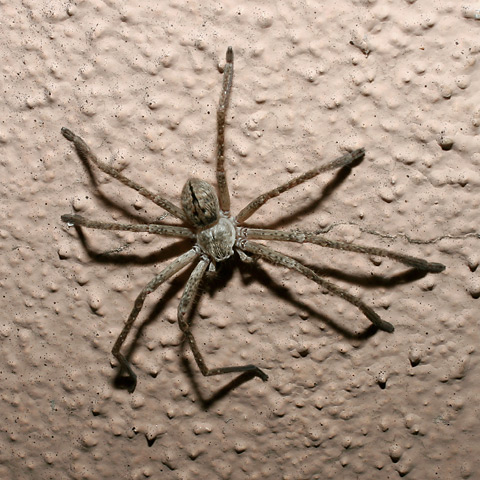 I spotted this Giant Crab Spider on the outside wall of my garage one night in September of 2005.

I'm not sure how such a large spider can sneak inside, but it's not uncommon to find one of these spiders inside your house. Once inside, Giant Crab Spiders like to hide behind wall hangings and furniture during the day and then emerge after dark to hunt.

One evening at someone's house here in Tucson, I was leaning back in a chair against a wall while watching television. I stood up to go get a drink and was horrified to see that a Giant Crab Spider was on the wall just above where my head had been, and if I hadn't stood up, it might have crawled onto my head. After a moment of hysterics (I have arachnophobia), I went and got the vacuum, attached the hose, and then vacuumed up the spider. It was so large that it made a horrible "thwup" sound as it was sucked into the vacuum.

Later, I had an even worse experience with one in my own house. Giant Crab Spiders like to travel in heating and cooling ducts inside houses, and one had found its way into my bedroom through this route. My bed is directly under the vent, and the huge Giant Crab Spider somehow managed to fall out of the vent and land right on my neck! In a panic, I instinctively grabbed it and flung it across the room, where I later found the unluckily clumsy spider dead. I'm fortunate that it did not bite me with the rough handling I gave it. I have since put window screen on my vent so that this will never happen again.

Giant Crab Spiders love live in my garage, where I leave them to hunt insect pests in peace. These spiders are very beneficial in controlling cockroaches and crickets, and if you are brave enough not to use the vacuum method, Giant Crab Spiders in the house should be captured alive and put outside. They can be captured by inverting a large jar over them and then sliding a stiff paper over the jar mouth. Giant Crab Spiders should never be picked up or handled with bare hands (shudder) because they will bite, but they are not dangerous to non-invertebrates.