My four Screech-Owl birdhouses need cleaning out before the breeding season in April, but this process always makes me nervous because the grumpy Western Screech-Owls (Megascops kennicottii) use them year-round, and it's hard to tell if an owl house is occupied unless the owl has its head sticking out. 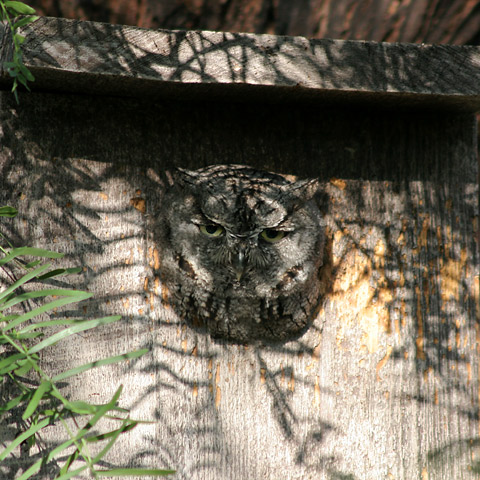 One side of the owl birdhouse swings open, and I really don't want to open up an occupied owl house and traumatize the poor owl inside into never using that birdhouse again. Tapping on the box to see if you get an angry owl or opening the side just a crack and peeking inside are possible, but admittedly not ideal methods which can be used to avoid this.

Late winter is a good time to clean out Western Screech-Owl birdhouses because generally only the breeding pair remain in the territory at that time of year. During the spring, the owls may be nesting inside, and during the summer to sometime in the fall, the adults and juveniles will occupy several of the owl birdhouses during the day.

When the owl birdhouses are cleaned out, all sorts of bits and pieces of their prey (mainly bird feathers and large beetle shells) may be found inside, which tells me that Western Screech-Owls will eat inside their birdhouses. This is probably a safe strategy in my neighborhood because Great Horned Owls (Bubo virginianus) are common here, and these much larger owls have killed at least one of the Western Screech-owls in my yard a few years ago.