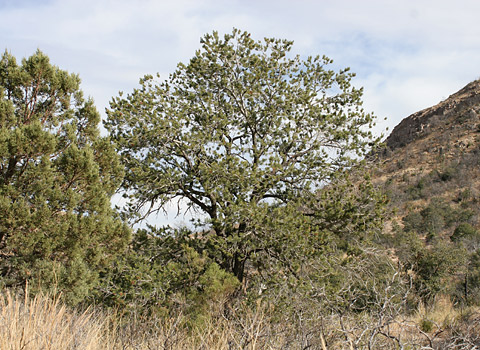 Border Pinyons are very slow-growing and have a more rounded growth form than many other types of pine trees. They have 1 to 2.5 inch (2.54 to 6.35 cm) long needles in bundles of three and small, rather flattened brown cones. 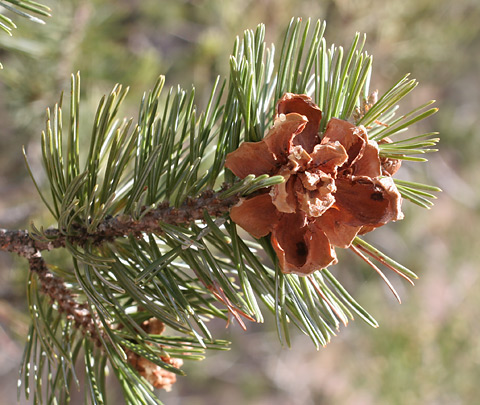 The cones actually look very much like brown, thick-petalled flowers. Border Pinyons and other Pinyon (or Piñon) pine trees have edible, delicious seeds known as pine nuts. Pine nuts mature in the fall and are eagerly sought by birds, squirrels, and humans. The pine nuts can be eaten raw, but they taste best when roasted. 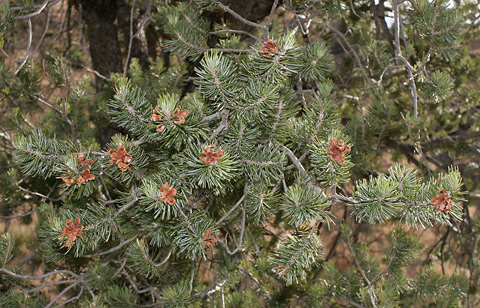 Border Pinyons used to be considered a variety of Mexican Pinyon (Pinus cembroides), which is no longer officially recorded in Arizona (there is apparently still disagreement over this). Both of these species are very similar in form, and unlike all other US pinyons, they have needles in bundles of 3. I don't know how to distinguish between these two species, but since Mexican Pinyons do not occur in Arizona, I know these to be Border Pinyons. Both species do occur in New Mexico, so their identification there is far more difficult.