Tailless Whipscorpions (Paraphrynus mexicanus) are nocturnal arachnids found here in southern Arizona. They use their long, delicate, whip-like, antenniform front legs as sensory organs to search for prey in the dark. 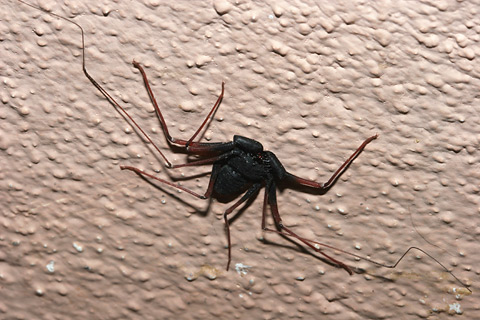 These arachnids look horrifying, but they are really quite harmless unless you happen to be a cockroach. They have a peculiar affinity for my garage (otherwise known as the invertebrate zoo), and I see them fairly frequently, especially on warm summer nights.

Despite their common name, Tailless Whipscorpions are not scorpions and have no stingers. They do appear to possess large, scorpion-like claws, but these are their large, spiny pedipalps that they use to capture their insect prey.