At the dawn of the new year, the native wildflowers are still sleeping or not yet born, and even many of those cultivated plants still blooming have only a few tired and tattered flowers, but there is one plant in glorious full bloom at this time here in Tucson, Arizona. 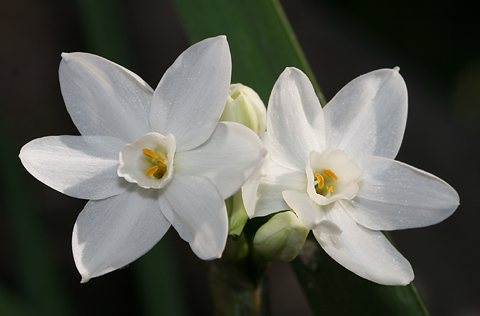 The cultivated Paperwhite Narcissus (Narcissus papyraceus) in my front courtyard began blooming around Christmas, and now even more of their beautifully snowy white flowers are opening to greet the new year. These plants are in the Lily Family (Liliaceae), and they are native to Europe and the Mediterranean. 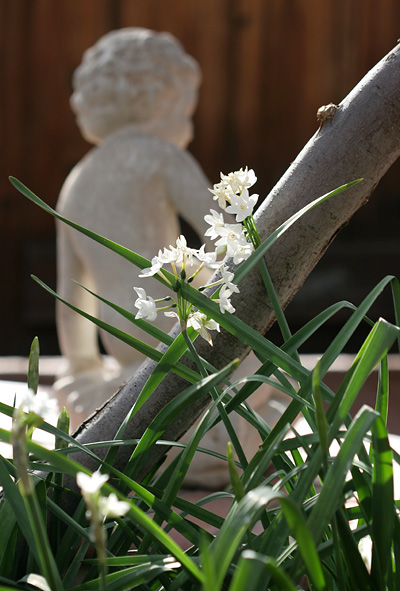 Plants in the genus Narcissus include Daffodils, Jonquils, and Narcissus, and they get their genus name from the fable of Echo and Narcissus in Greek Mythology. Echo was a beautiful, but overly talkative nymph who was cursed by Juno so that she could no longer talk on her own, but only repeat the last few words of other's sentences. Echo later fell in love with a very beautiful, but cruel and heartless young man named Narcissus who was incapable of loving anyone. When she was unable to get him to love her, Echo faded away with grief until nothing but her voice remained.

Because of his heartlessness toward Echo as well as toward the other nymphs who adored him, Narcissus was cursed so that he would know what it was like to love someone who could never return his affections. As he bent over a pool of water to get a drink, he gazed upon his own reflection there and immediately fell in love with it, thinking it the most beautiful being that he had ever seen. He tried to embrace his reflection, but each time he touched the water, causing it to ripple, his beloved would disappear. 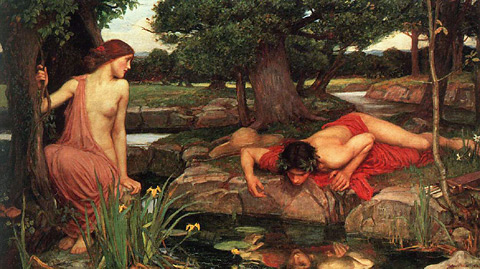 Narcissus, consumed with unattainable love and forgetting all else, pined away over his reflection with the sorrowful Echo by his side until he eventually died. For his great beauty, Echo and the nymphs grieved for him, and his body was magically turned into a flower, the Narcissus, so that his great beauty would always be remembered.

The beautiful, but self-obsessed Narcissus not only gave his name to a genus of lovely flowers, but also to a psychological condition, narcissism (narcissistic personality disorder) which includes excessive self-admiration, a lack of empathy, and grandiose fantasies among other characteristics.