Do not resume old conflicts is the meaning of this common idiom, and it is very good advice both for both its idiomatic and literal interpretations, as it can sometimes be dangerous to awaken old conflicts or sleeping dogs.

Dogs (Canis lupus familiaris) were domesticated from wolves (Canis lupus), and although they have been bred over the millennia to be very tame with many trusting, puppy-like behaviors, some of the wild wolf still remains. Some dogs, like my Labrador Retriever, Sammy, are very docile and have the unconcerned sleep of puppies. 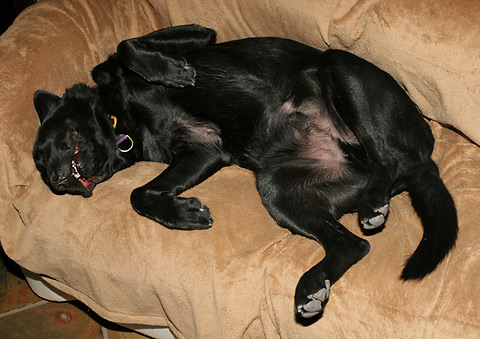 Here Sammy is snoring away on the couch. He is a deep sleeper and does not startle if suddenly awakened. Wolves have a strong fight or flight response, and will respond with fear and/or aggression if startled awake, but this has been mostly bred out of amiable, good-natured dogs like Sammy.

My late dog CJ, a Chesapeake Bay Retriever, was very different. In him, the wolf was just beneath the skin. Like a wild animal, he would respond with fear and sometimes aggression if startled awake or touched while sleeping. My other Chesapeake Bay Retriever, Chessie, is just like Sammy, very docile and trusting, so sometimes it just depends on the individual dog and not the breed.

This immediate fight or flight response upon sudden awakening is important for the survival of wild canines, but it is not a good trait in a domesticated dog because it can lead to fear biting. CJ had to be kept away from small children, and visitors had to be warned to leave him alone. Thankfully, he was not overtly aggressive like some dogs and he never went after anyone. He liked people, especially kids, but as he got older, he became increasingly cantankerous and eccentric. 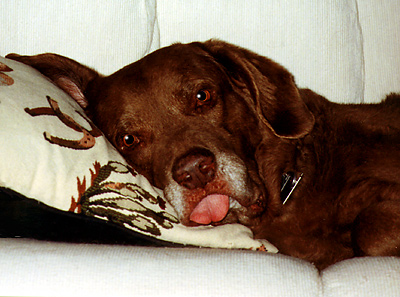 His favorite toy was a hard rubber ball (he ate the softer rubber balls), which he carried with him everywhere. Years of holding a hard rubber ball in his mouth eventually bowed out his lower teeth, and as a result he often slept with his tongue hanging out. Because the ball was so important to CJ, he thought that everyone else must be obsessively lusting after it as well. I would hear his teeth squeaking against the rubber ball as he tightly clenched it in his mouth like a greedy dragon if anyone happened to look at it. He would literally scream if I reached out a grabby hand toward the ball or said the forbidden words "ball" or "I want it!" to him.

I will never forget the time that he got into a terrible fight with his beloved rubber ball. We were going up to the mountains for the day, and CJ was riding in the back of the car with the rubber ball in his mouth. After a while, he lay down to sleep and dropped the ball. As we drove up the winding mountain road, the ball began to roll around in the back of the car, and it eventually bumped into the sleeping CJ. He startled awake, leapt to his feet and snarled at the offending rubber ball. The chastened rubber ball then rolled meekly away into a corner as we went around another bend in the road, only to defiantly come rolling out again and deliberately bump into CJ on the next curve. CJ was furious and outraged at this obnoxious ball's behavior as it continued its rolling retreats and attacks as we drove up the curving mountain road. The sound from the back of the car was terrible! It sounded like we had a hellacious dog fight going on back there, but it was only one dog and a feckless rubber ball that just couldn't let a sleeping dog lie.

CJ made up with his rubber ball when we got home, and he devotedly carried it with him and obsessed over it for the rest of his life.