This young Cactus Apple or Engelmann's Prickly Pear (Opuntia engelmannii) looks like it was repeatedly kissed by someone wearing yellow-green lipstick (ouch), but it was actually sucked on repeatedly by Cactus Bugs or Opuntia Bugs (Chelinidea sp.). Cactus Bugs lay their eggs on the undersides of Pricklypear (Opuntia spp.) spines, and both the adults and the nymphs feed on these cacti by biting into their skin and sucking their vascular fluids. 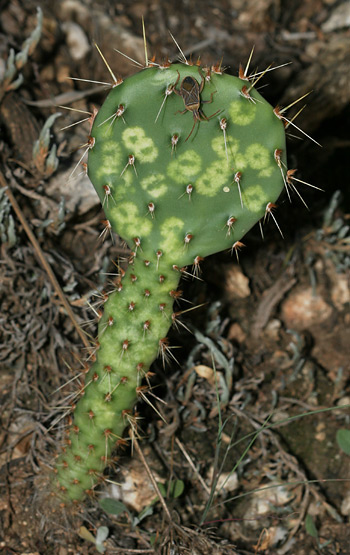 Arizona has at least two different species of Cactus Bug, Chelinidea tabulata and C. vittigera (formerly C. vittiger), so I'm not sure of the identity of this one above that I spotted here in Tucson, Arizona.

I had thought that the Opuntia cacti with these yellow rings were infected with a cactus virus, especially since many of them later died of one, but I discovered that these chlorotic rings are directly caused by the sucking of Cactus Bugs. Unfortunately, feeding Cactus Bugs not only damage an Opuntia cactus, they can also cause it to become infected with a virus (spreading or enlarging yellow mottling or rings), fungi (gray or black spots), or bacteria (rot). These secondary infections can be fatal to cacti. 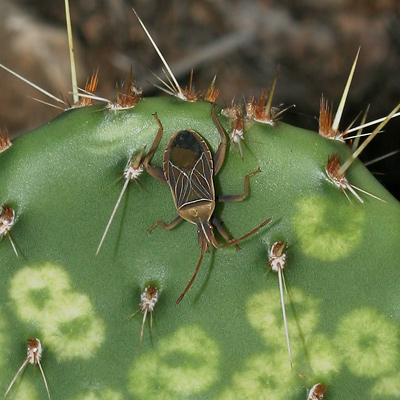 Adult Cactus Bugs are brown to blackish, about 1/2 inch (1.3 cm) long, and have a distinctive yellowish stripe along the top of their head, a solid yellowish pronotum, yellowish veins on their leathery forewings, and the typical shape of a true bug (Order Hemiptera). The nymphs are plump, teardrop-shaped, and generally range in color from red to green to brown.

True bugs or Hemipterans have sucking mouthparts, and while some of these bugs are predatory like Assassin Bugs and will capture and suck on other insects, others feed on plants, and some even suck human blood. True bugs like Cactus Bugs that suck plant juices can transfer plant diseases from one plant to another as they feed or leave behind open wounds that can also become infected.