During the summer, Kissing bugs (Triatoma rubida) can be seen out prowling around looking for blood meals after dark here in Tucson, Arizona. These 1 inch (2.5 cm) long insects normally feed on baby rodents in their burrows, but these bloodsuckers will also bite any immobile or sleeping animals they find, including humans. 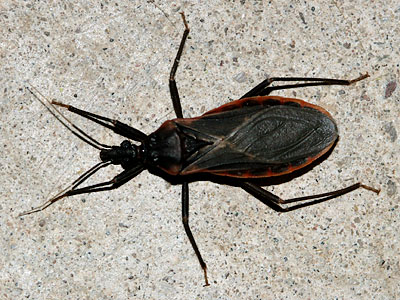 Kissing bugs are attracted to exposed skin and warm, exhaled breathe with its high CO2 concentration. They are commonly called kissing bugs because one of their favorite places to bite sleeping humans is on the lips (near the eyes is another of their favorite biting places). The skin on the lips and around the eyes is relatively thin, and thus easier for the kissing bugs to pierce. The bites of these bloodsuckers are painless, and victims will often not know that they have been bitten until they awaken in the morning with a swollen, bug-kissed lip or a puffy eye.

These insects are generally found in areas with natural, desert vegetation and not in urban Tucson. They are very common around my yard and I have even found them inside my house. I'm not sure how they get in. Luckily, I have never been bitten by a Kissing Bug, but one did bite Solomon, my Golden Retriever. 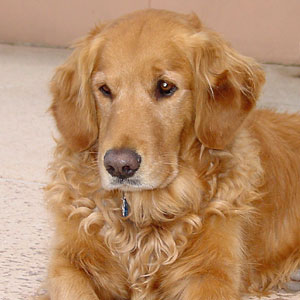 Solomon was sleeping soundly in the hallway, and he was totally unaware that a kissing bug was biting him on the mouth. Horrified to see a Kissing Bug on him, I flicked the bug off with my shoe and then stomped on it before it could get away. The squashed bug left a large, dog blood stain on the hall carpet.

Kissing bugs are not just disgusting, they can also be dangerous. Repeated bites can cause some persons to become sensitive to the bug's saliva, triggering allergic reactions or anaphylactic shock. This species of kissing bug also carries Chagas Disease, a tropical disease caused by Trypanosoma cruzi parasites that live in and are spread by the feces of kissing bugs (Triatoma species). These bugs defecate while feeding on blood, so their fecal parasites can contaminate the site of their bites and infect those bitten, especially if the bite victim rubs the bite area before washing it off.