Grasslands are quite fire-prone, which is fortunate because fire helps preserve grasslands by killing invading trees and shrubs that would eventually take over the grasslands. These rolling, grassy hills southeast of Tucson are now partly covered with junipers and other trees. 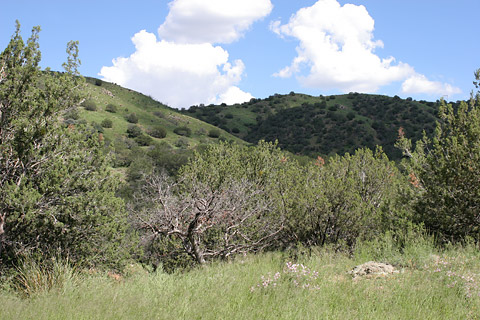 While fire is beneficial for grasslands, it is extremely harmful for Sonoran desertscrub plant communities, the predominant vegetation type found around Tucson and in Saguaro National Park. Native grasses here are relatively sparse and limited, and much of the ground is bare rock and soil. The desert trees are small and widely spaced and many of the plants are plump, water-filled cacti and succulents with a low fuel load. While cacti and succulents don't tend to burn, they can be easily killed by fire.

Unfortunately, humans have introduced non-native, drought-tolerant grasses that are able to grow in Sonoran desertscrub. Some of these grasses were introduced to expand cattle grazing areas, while others were introduced as garden ornamentals. These non-native grasses are currently invading Sonoran desertscrub, turning it into a fire-prone grassland. Fire-intolerant Sonoran Desert species like Saguaros (Carnegiea gigantea) and Desert Tortoise (Gopherus agassizii) are especially threatened by the increased risk of fire that these invading grasses bring with them.

Several species of non-native grasses in particular are major problems in the Tucson area. 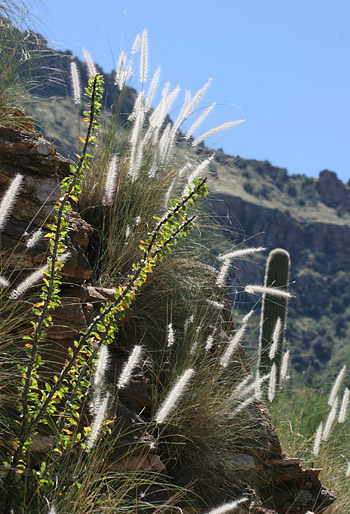 One of these species is Fountain Grass (Pennisetum setaceum), and this attractive ornamental grass with its pinkish to white seed plumes is unfortunately increasingly abundant in Sabino Canyon, thus increasing the chances that this beautiful canyon may someday catch fire.

Two other problem species of non-native grasses are Buffelgrass (Pennisetum ciliare) and Red Brome (Bromus rubens), which have already been responsible for fires here in Sonoran desertscrub.