Some of the most common desert trees around Tucson are Yellow Paloverde (Parkinsonia microphylla) trees. Their common name "Paloverde" (palo verde) means "green stick" in Spanish and refers to their distinctive green bark. 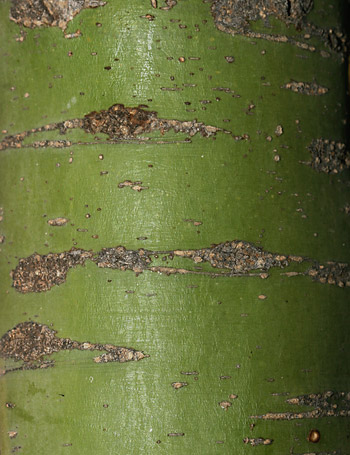 Paloverde bark is green because it contains chlorophyll. Chlorophyll is normally found in leaves and is used by plants as part of photosynthesis to convert light energy to food. Three-quarters of the photosynthesis in Yellow Paloverde trees takes place in their green bark instead of in their tiny, rather sparse leaflets. 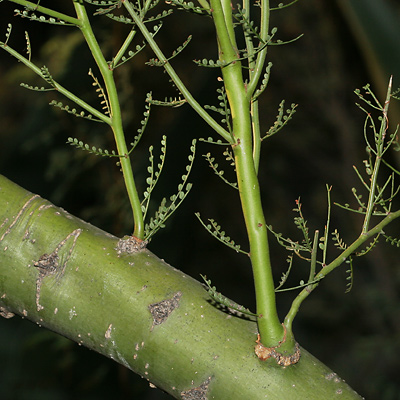 To conserve water, the leaves will appear when there is sufficient rain, and drop off during periods of drought. Bark photosynthesis requires less water, but is much less efficient and produces less food for the growing trees than leaf photosynthesis, so Yellow Paloverdes tend to grow slowly and most are not very large. An 18 foot (5.5 m) tall Yellow Paloverde tree may actually be several hundred years old.

Paloverde trees will not only shed their leaves in times of drought, they will also shed some of their extra branches as well. Fallen branches are a common sight under paloverde trees in dry years, and they are favorite hiding places for lizards and rabbits.