One September day, I heard the sharp, loud, chirping alarm calls of what sounded like an angry cardinal, and I discovered this male Northern Cardinal (Cardinalis cardinalis) looking in the window. 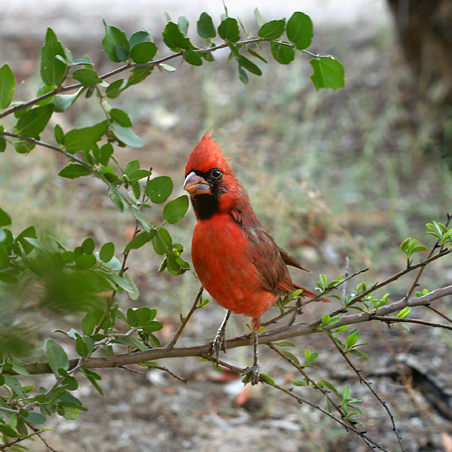 I didn't see anything that could have upset him, but Northern Cardinals are very territorial, so he was most likely angered at seeing his own reflection in the window. He seemed a bit confused to see me magically appear at the window amidst his reflected "rival", and he looked at me quizzically for a few seconds before he flew off.

Northern Cardinals are quite common here in Tucson, especially in residential and moist, riparian areas, although it is a bit strange to see them among the Saguaros and other desert cacti, since Northern Cardinals are characteristically an eastern US bird, but they seem to do quite well here in the Southwest and in Mexico.

Because of their extreme territoriality, only one pair of Northern Cardinals regularly visits my bird feeder. Surprisingly, they do grudgingly tolerate the other cardinal species found here in Tucson, Pyrrhuloxia (Cardinalis sinuatus), in their territory, but I have noticed that there are usually a few chirping alarm calls and minor, wing-flapping aggression if both species of cardinals happen to show up at my bird feeder at the same time.