Late afternoon on September 20, 2005, I had just sat down on the couch to watch the evening news when I saw this small, young Common Kingsnake (Lampropeltis getula) come slithering out from under the television cabinet. 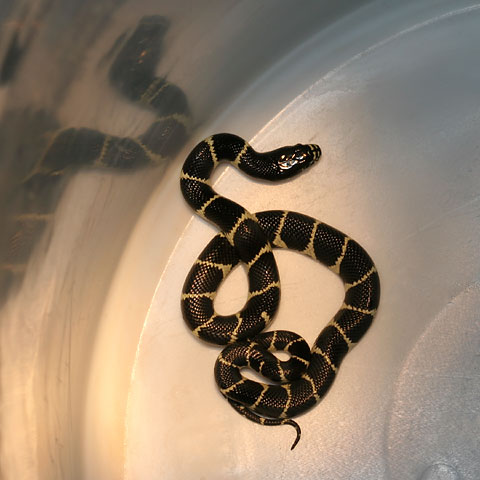 I called my dad and he used his new snake grabber pole to capture the snake and put it in a bucket. The little Common Kingsnake was then taken outside where it belonged and released.

This is not the first snake I've discovered in the house. A little over a month before, I had discovered a Western Longnose Snake in the house. As before, I don't know how these snakes are getting into the house, but I suspect that they may have been hiding inside some folded and bagged newspapers, which were delivered before dawn and not immediately opened.

Common Kingsnakes are non-venomous medium to large snakes, and they can be quite variable in their coloration from solid black to speckled or banded with white or yellow. This one was young, which is why it was so small.