During September and October, my hummingbird feeders are emptied every night by large, nectar-feeding bats like these two Lesser Long-nosed Bats (Leptonycteris curasoae). 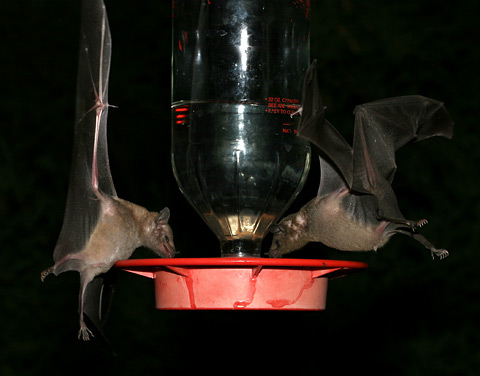 These nectivorous bats normally fatten up on the sugary nectar of agave flowers in preparation for their fall migrations south to Mexico and Central America, but they have learned that hummingbird feeders are also good sources for sugary nectar. Bats of both species will rapidly lap up the feeder's sugar water with their unusually long tongues, like the Mexican Long-tongued Bat (Choeronycteris mexicana) shown below. 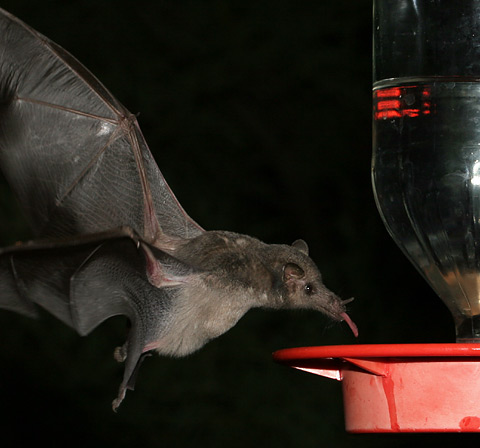 Mexican Long-tongued Bats and Lesser Long-nosed Bats inhabit caves and mines, which there are quite a few of around here in southern Arizona. These bats are important pollinators of many desert plants like Saguaros and Agaves, and given that these bats are also threatened or endangered, I do not mind having to refill my hummingbird feeders every morning and purchase bags and bags of sugar for them. Besides, they are most entertaining to watch at night as large numbers of them circle around my yard and takes turns swooping up to my feeders. 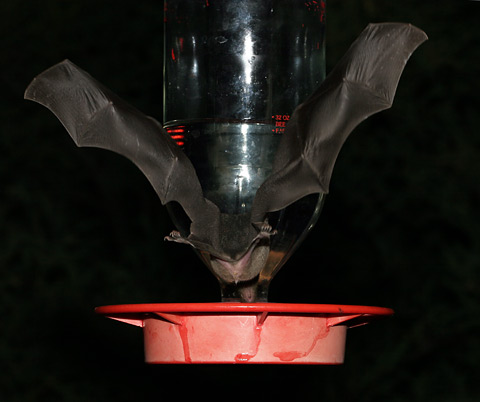 These bats don't seem to mind humans watching them from a small distance, but they do not like dogs, and they will not visit my feeders if my dogs are around.