Most arboreal owls have feathers the colors and even the patterns of tree bark to camouflage them, and this protects them while they sleep both from predators and from harassment by outraged prey species. Many species of songbirds will join together to harass any owl they discover during the day, and this common bird behavior is called mobbing.

Birds know that most owls are silent, stealthy night hunters, and not quick daylight hunters that can catch small birds on the wing, so birds will get close (but not too close) to them and scold them loudly. This warns other birds about the presence of a bird predator in the neighborhood and can so annoy the owl that it grumpily flies off to find somewhere quieter to sleep. 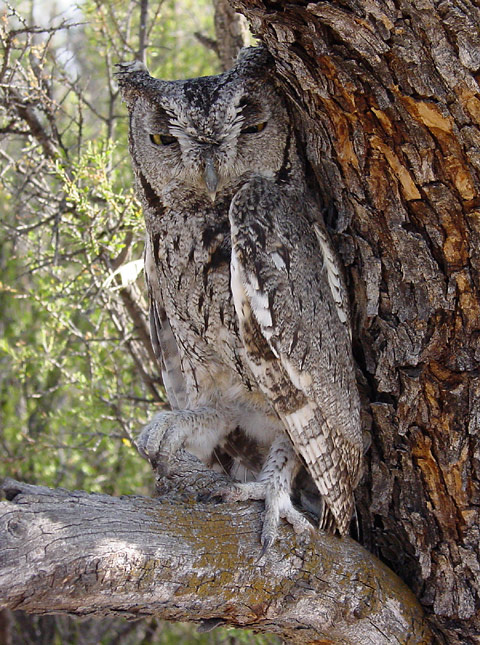 This Western Screech-Owl (Megascops kennicottii) perched against the trunk of a Velvet Mesquite tree in an attempt to camouflage itself, but a bird saw it and began scolding which then attracted a varied flock of other angry birds and eventually a curious photographer. A tree full of different species of birds all scolding usually means that they have sighted an owl or a snake.