Yesterday, a juvenile Western Screech-owl (Megascops kennicottii) was sitting at a birdbath fountain calmly watching me water the plants in my front garden. The owl didn't seem inclined to move away from the nice, cooling water in the birdbath, instead it would just crouch down and give me a goggle-eyed stare whenever I got too close.

The owl was soon joined by a thirsty, male Greater Roadrunner (Geococcyx californianus), which can be recognized as a male due to the brilliant coloration around his eyes. 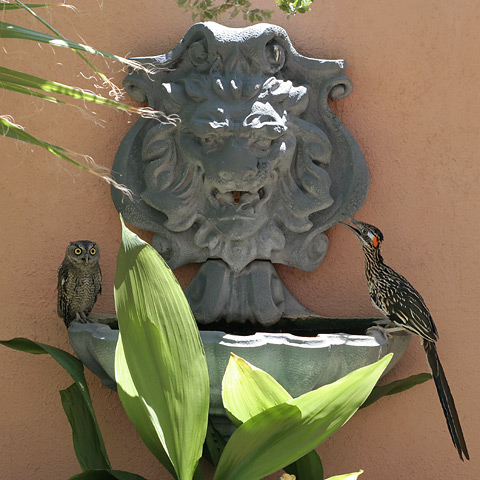 After some initial wing flapping and aggressive posturing, these two predators calmed down and decided to share the water once they realized that neither could frighten the other bird away. I dropped my garden hose and went inside to get my camera. Neither bird seemed bothered by my presence, and I was able to get quite a few pictures of them before the Roadrunner had drunk his fill and left. The owl remained there for the rest of the day, and it's back again today.