My dog Bounder, a Doberman mix, often accompanies me on my wildflower photographic expeditions because he is VERY enthusiastic about going for a ride in the car and is an expert at making me feel guilty for not taking him along. 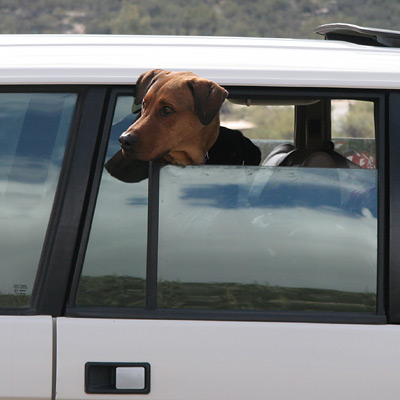 Bounder screams, jumps, capers about like a mad clown, punches me in the stomach, and bangs on the windows with his front feet until he is certain that he is going in the car, which of course rewards and reinforces this naughty, out of control behavior. The odd thing is that he hated the car as a puppy. He was terrified and carsick and would huddle in the back of the car shaking and vomiting. After gentle coaxing, lots of dog treats, and numerous car trips of gradually increasing length (from just starting the car, to driving down the driveway and then returning, and so on), he eventually grew to absolutely adore car rides, and now he throws tantrums if he can't go with me.

Bounder hasn't quite grasped the concept of inside and outside the car, and he will attempt to hunt wild animals and dogfight with other male dogs outside the car while he's inside the car. I've seen people walking their dogs beside the road visibly startled as Bounder ferociously barks out of the window just as we drive past them. In Bounder's mind, our driving past a walked dog is actually the inconsiderate dog approaching our car (Bounder's territory) too closely.