In early July of 2005, I explored the wash in Molino Basin Campground in the Santa Catalina Mountains near Tucson, Arizona, and the only plant that I found in full bloom was this Thurber's Desert Honeysuckle (Anisacanthus thurberi). 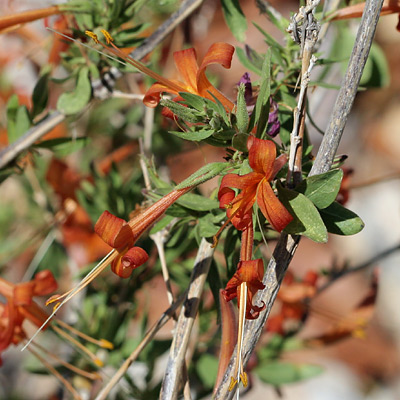 These native shrubs bloom most heavily in the springtime, but they also bloom sporadically throughout the year as well, so it was not that unusual to find this Thurber's Desert Honeysuckle blooming in July. Perhaps because they were a bit drought-stressed, the flowers were an unusually dull orange color with hints of brown. Whenever they do bloom, the tubular, orange flowers on these scraggly, rather inconspicuous shrubs attract hummingbirds.

Thurber's Desert Honeysuckles are mainly found growing in rocky washes and along streams in the mountain foothills around Tucson, and Molino Basin Campground is a good place to observe them here.