Gophersnakes or Gopher Snakes (Pituophis catenifer) are very common snakes here in Tucson. Gopher snakes are non-venomous and can reach up to 7 feet (2.1 m) or more in length.

Years ago, I was walking my Chesapeake Bay Retriever when I saw a tiny, black and white banded snake on the trail. Fascinated, I stopped to look at it and I wondered what species it might be. My dog saw me looking down at the snake and came over to see if it was food or something else good, and before I could stop her she ate it. Poor little snake, I never did find out what kind it had been.

My dog had another encounter with a snake, this one was a larger, more aggressive Gopher Snake. She saw the snake moving around in some dead weeds and lunged toward it. I tried in vain to pull her away from it by her leash, but Chesapeakes are very strong and very stubborn. The Gopher Snake coiled up, hissing and striking at her, and even rattling its tail in the dead weeds to sound like a rattlesnake. My dog didn't seem to be too afraid, but she immediately lost interest after seeing the snake's furious display and just walked away. She now has no interest in snakes and I don't think that she even notices most of them. My greatest fear now is that she will inadvertently step on one. 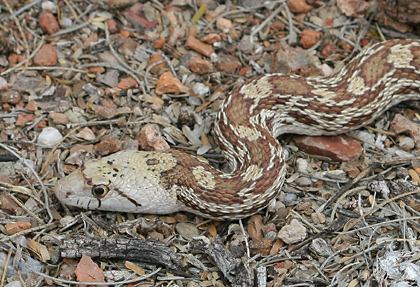 The Gopher Snake in these photographs was by a roadside, and my Chesapeake and I were only a few feet away. My dog was completely uninterested in the snake (if she even saw it) and the snake itself was motionless, probably hoping to avoid notice.