Great Horned Owls (Bubo virginianus) are large, predatory birds that hunt at night and rest during the day. They are able to silently swoop down on their prey because their feathers, like those of other owls, have special sound-dampening edges. These owls hunt a variety of prey including rabbits, skunks, and even other owls. I have found Western Screech-owl and Elf Owl wings under a large tree in my yard where the Great Gorned Owls like to perch.

Great Horned Owls have wingspans of up to 57 inches (145 cm) and they can weigh up to 5 1/2 pounds (2.5 kg). The females are larger than the males. The Great Horned Owl in the photograph below is a juvenile which can be recognized by their downy fluff and lack of full ear tufts. 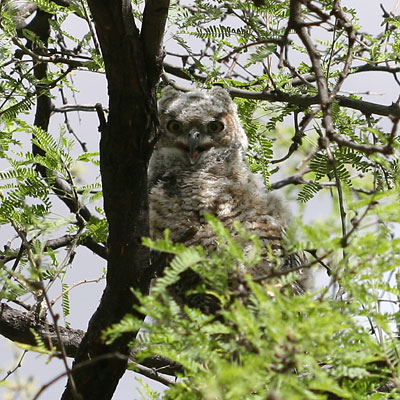 I saw this owl and its sibling in eastern Tucson's Agua Caliente Park in late April.