Polynesian Rats (Rattus exulans) are common in a variety of habitats at lower elevations here in Hawaii. These rats are native to Southeast Asia, but they have now spread to the islands of the tropical and subtropical Pacific thanks to humans. Polynesian Rats were originally brought here to Hawaii by the early Polynesians, and these adaptable rodents can now be found on all the major Hawaiian Islands. Polynesian Rats are not found in the continental United States. 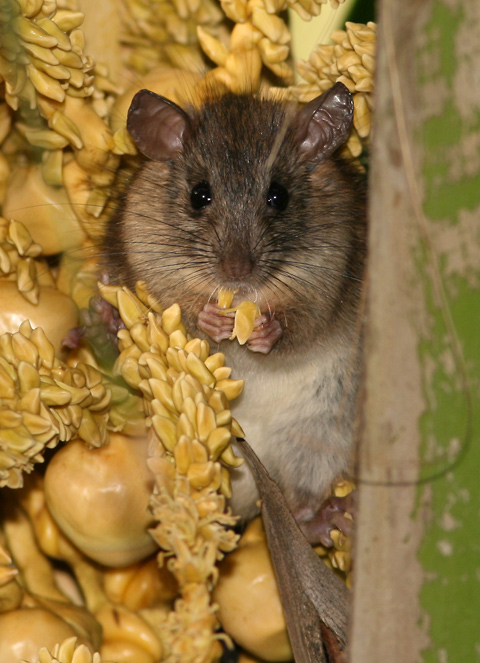 I observed this particular Polynesian Rat eating flowers and nutlets in a Coconut Palm (Cocos nucifera) in my yard during the daytime. Like the other rats found here in Hawaii, Polynesian Rats are normally nocturnal, but if rat populations are unusually high, then rats can be seen foraging for food during the daytime to avoid heavy nighttime competition.

Polynesian Rats are omnivorous and will eagerly devour a wide variety of food including fruit, nuts, seeds, leaves, roots, insects, spiders, snails, worms, lizards, bird eggs, nestlings, and whatever they can scavenge from humans. Besides eating coconut flowers and nutlets, the rats in my yard like eating ripe papayas right on the tree and taking occasional bites out of tomatoes and liliko'i fruit. 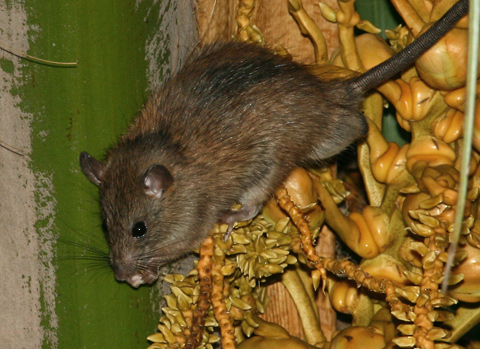 Because rats are such voracious opportunists and not native to Hawaii, their introduction has caused a great deal of environmental damage to the native plant and animal species here, which weren't adapted to rat predation. Unfortunately, Polynesian Rats were not the only rat species introduced to Hawaii. Norway Rats (Rattus norvegicus) and Black Rats (Rattus rattus) were also introduced here, but these verminous pests traveled to Hawaii on European and American sailing ships instead of Polynesian canoes.

Of the three rat species found here in Hawaii, Polynesian Rats are the smallest and least aggressive. These rats are brown and rufous above, grayish white below, and have relatively large eyes, large, mostly hairless ears, a slender, pointed muzzle, small feet, and a solidly dark, scale-ringed tail equal in length to their up to 6 inch (15 cm) long body.

Because of their smaller size, relatively large eyes, and more delicate features, I think that Polynesian Rats have a somewhat "cuter" appearance than the other rats found here, but they can still be hard to identify unless you can get a close-up photograph or a really good look at one. 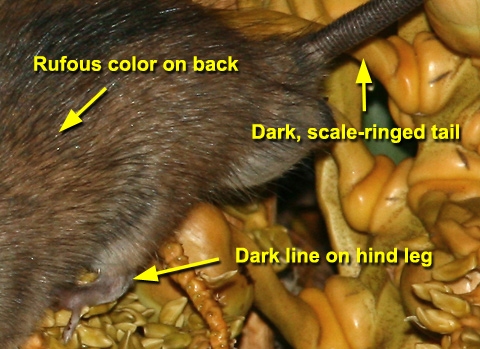 Polynesian Rats can be easily identified if you can manage to see their hind legs because they have a distinctive dark line on their hind legs above the ankle. Norway Rats and Black Rats lack this marking. Like Polynesian Rats, Norway Rats also have brown fur, but they are much larger and have smaller eyes, smaller, hairy ears, a blunt muzzle, larger feet, and a shorter, light colored tail. Some Black Rats have brown fur, but they are larger, lack rufous-colored fur on their back, and have a longer tail. Both Polynesian Rats and the much more arboreal Black Rats can be seen climbing around in trees, while Norway Rats tend to just stay on the ground.

Polynesian Rats and and Black Rats are the most common rats here in Hawaii, so if you spot a rat here, it's most likely one of these two species.