One of the most ubiquitous Hawaiian birds is the Common Myna or Indian Myna (Acridotheres tristis). Common Mynas are native to south Asia, and they were brought here to Hawaii in 1865 to control a large infestation of army worms (plant-damaging moth caterpillars). The clever and adaptable Common Mynas now thrive here in Hawaii and are an everyday sight as they forage for food along roadsides, on lawns, in parks, and in other areas near humans. 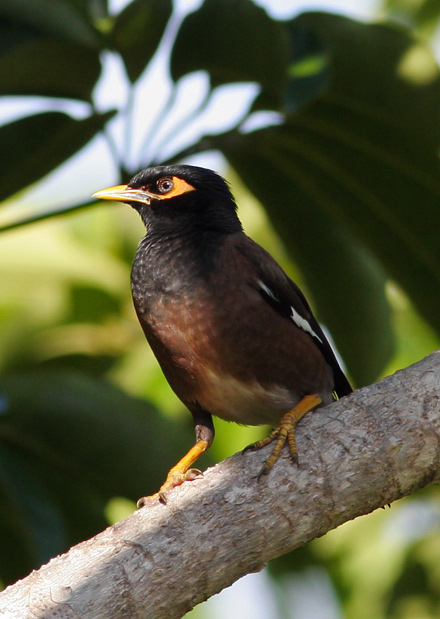 Common Mynas are omnivorous and will eat insects, worms, spiders, snails, slugs, small lizards, bird nestlings, eggs, fruit, flowers, grains, and garbage. I've even seen Common Mynas greedily eyeing the scuttling crabs along the shoreline. Although they don't visit my bird feeder, Common Mynas do like to scavenge on my lawn for slugs and snails, which I'm more than happy to let them have.

Although Common Mynas casually raid or steal the nests of other birds, they are very defensive of their own nests. I once observed a Hawaiian Hawk try to raid a Common Myna nest in a coconut palm, and the outraged parents responded with earsplitting screeching and vicious dive-bombing strikes on the hawk's back. Annoyed by the attacks and harassment and missing a few feathers, the hawk soon gave up and flew away.

Like European Starlings, Common Mynas are in the Family Sturnidae and are very starling-like in their general appearance and behavior. Common Mynas are bold, curious, intelligent, pugnacious, loud, and gregarious, and like starlings, they walk instead of hop and can learn to mimic common sounds. Captive Common Mynas can even be taught to imitate human speech.

Common Mynas have a black head, a brown body, a yellow bill, bare yellow eye patches, black wings with white patches, a white-tipped black tail, and sturdy yellow legs. The sexes are similar, but the males are a bit larger.