Although Hawaii does not have snakes, there are slithery, venomous creatures here like the Giant Centipede (Scolopendra subspinipes). Giant Centipedes were accidentally introduced to Hawaii by humans, perhaps by the Polynesians or by the first explorers, and they have since become one of the most feared and hated pests here because of their venomous and painful bites, their annoying tendency to enter houses, and their active climbing and exploring, which can lead them to do things like crawl into your bed at night. 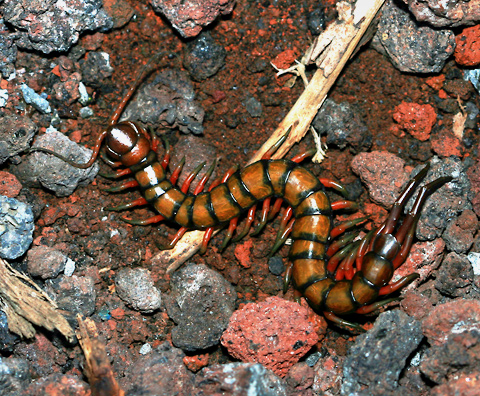 My excited dogs found this one hiding behind a bedroom door in my house, and they were foolishly trying to capture it. Fortunately, I captured it instead and later released and photographed it in a nearby vacant lot. I didn't want to let it go in my yard because I was afraid that it would just sneak back inside. Giant Centipedes can enter houses through small gaps in windows and doors.

This was not my first encounter with a Giant Centipede here. One evening, I was sitting at my computer when I felt something brush past my foot. I glanced down and was horrified to see a Giant Centipede even larger than this one galloping away. I cornered it and captured it in a large cup and then tossed it off my balcony. I live on the second floor, but this hasn't stopped centipedes and millipedes from coming inside.

Bites from Giant Centipedes are excruciatingly painful, may cause allergic reactions and massive swelling, and can be slow to heal, so people or pets who are bitten by them may require medical treatment. Luckily, Giant Centipedes are not aggressive and won't chase after and attack you, but they will bite if handled and they may bite if they accidentally crawl on you.

Giant Centipedes can grow to 6 inches (15 cm) or more long and have a brown head with long antennae, 21 black-edged, lighter brown to greenish brown body segments, and red legs with green tips. Centipedes have a single pair of legs per body segment and a pair of fang-like, venom-filled, modified front legs known as gnathopods that they use to envenomate or "bite" their prey. The other two centipede species found here in Hawaii are much smaller and are essentially harmless.

These large, nocturnal centipedes are generalist predators and will capture and kill a wide variety of prey, including cockroaches and other insects, slugs, earthworms, spiders, other centipedes, and even larger prey like geckos, frogs, and small mice.