Cuban Slugs or Two-striped Slugs (Veronicella cubensis) have become common garden pests in some parts of Hawaii. Cuban Slugs are native to Cuba, but they have spread to other islands in the Caribbean and have recently been accidentally introduced to the Hawaiian Islands. They were discovered on Oahu in 1985 and soon spread to the island of Hawaii. Here on the Big Island, Cuban Slugs are especially common on the rainy windward side of the island where they can find a lush variety of plants to eat and the moist conditions they prefer.

Cuban Slugs have a mantle (the tissue that secretes shell in snails) that covers the entire dorsal surface, and these slugs are up to 2 3/4 inches (7 cm) long, broadly flattened and elongated oval in shape, and light to dark brown in color with a distinctive lighter colored line down the back. There are sometimes two darker colored bands on either side of this lighter colored dorsal line. Although most are a drab brown color, a few Cuban Slugs are solid white albinos. I have not yet spotted any white ones here in Hawaii.

Cuban Slugs are nocturnal, spending their days hiding in dark, moist crevices and then emerging at night to feed on and damage a wide variety of plants. This particular Cuban Slug was found lurking under a rock. The volcanic rocks here in Hawaii are very porous, with numerous cracks and holes for these slugs and other creatures to hide in. 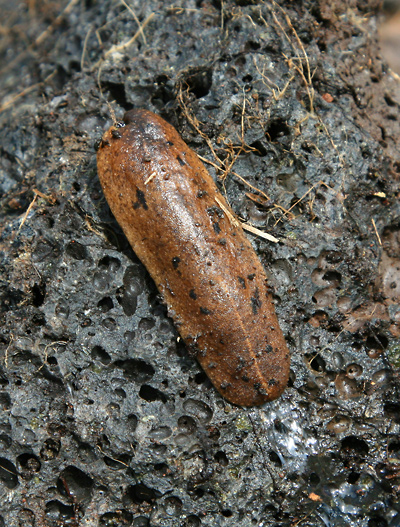 Like other land slugs and land snails, Cuban Slugs are simultaneous hermaphrodites, having both male and female reproductive organs at the same time. Although some other land mollusk species can self-fertilize, Cuban Slugs mate with each other in order to reproduce.

Along with other Hawaiian slugs and snails, Cuban Slugs can carry the larvae of the parasitic nematode Rat Lungworm (Angiostrongylus cantonensis), which can infect humans and cause eosinophilic meningitis. Humans can be infected by consuming poorly washed raw produce that has been polluted by slugs or contains tiny, easy to miss, young slugs.